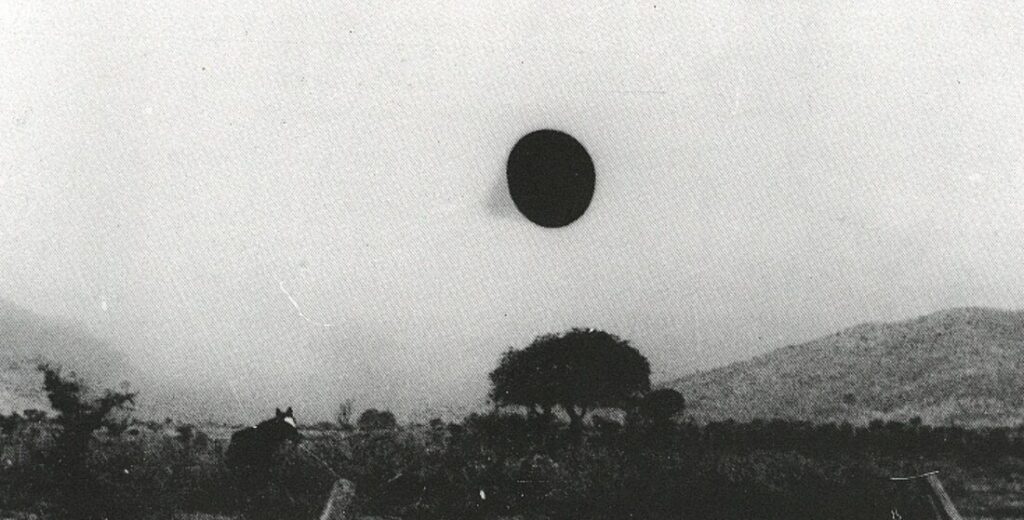 It is archived here for research purposes.

This sighting is one of the best recorded in Argentina, but it is practically unknown to English-speaking ufologists as it has been published in Spanish magazines only. Expedia Argentina has traveling information if you are thinking of visiting Yacanto to learn more about this sighting.

Perhaps for that very reason it has escaped the attention of the professional debunkers, but a more likely cause is that it is an extraordinary case for which their usual hand-waving techniques simply would not work.

It is a single-witness case, but this witness is a high-ranking officer of the Argentinean Air Force (AAF), who by a fluke was able to obtain a remarkable photograph as supporting evidence of his encounter.

Even in Argentina, and perhaps due to the association of the witness with the AAF, the case was not given much publicity until 1977, when it finally was reported in UFO PRESS (ref. 1).

The witness in this sighting is Hugo F. Niotti, then a captain of the AAF assigned to the Air Force School for Sub-officers located in the city of Cordoba. Contrary to what many would expect, his involvement in the case did not affect his military career, and seventeen years later, when finally interviewed by Roncoroni, he had risen to the high rank of vice-commodore, occupying a responsible position with the AAF.

On July 3, 1960, then Captain Niotti was driving from Yacanto toward Cordoba. The weather was inclement, typical of what one would expect for that area in the middle of winter. It was drizzling off and on, and the cloud deck was very low, perhaps 100-150 m.. The road was rather slippery, and Capt. Niotti was concentrating hard on his driving.

At approximately 4:30 PM, he was in the area of Villa General Belgrano, about 70 Km from the city of Cordoba. He had finished negotiating a wide S-curve, when he suddenly noticed a rather close and unusual object hovering near the ground to the right of the road.

Startled, he stopped the car, grabbed his camera, fortunately next to him on the seat, moved a few steps away, and proceeded to take a photo of the object, which was moving slowly. While he was engaged in winding the film to take a second shot, the object started to accelerate and disappeared into the clouds, which as stated, were very low.

The whole incident had lasted about 40 seconds and had developed into the most absolute silence. This eerie silence, coupled with the bad weather and the abruptness of the incident, gave Capt. Niotti a sense of irreality, which puzzled and confused him. In this mood, he jumped back into his car and continued his trip to Cordoba, where he proceeded to have the film processed.

Here is Capt. Niotti’s description of what he had seen. The object was conical in shape, with a height of 7-8 meters and a base diameter of 3-4 meters, with its axis almost parallel to the ground and its base facing the witness. It was at a distance of 80 to 100 meters from his location and moving very slowly toward the south, perhaps at 10 KPH, always parallel to the ground. It was rotating, also very slowly. It then accelerated very rapidly, attaining a speed of perhaps 200 KPH in 3 or 4 seconds, and disappeared into the low cloud bank. This sudden acceleration without any sound was inexplicable to the witness in view of his proximity.

The color of the object was a uniform dark gray. The surface was perfectly smooth without joints or rivets and had a definite metallic aspect.

As an officer of the AAF, Niotti was naturally reclutant to divulge his experience and initially told only a few fellow officers, who persuaded him to send the negatives and copies to the “Revista Nacional de Aeronautica” (RNA); the editors of this official magazine transmitted the photo to the “Servicio de Informaciones de Aeronautica” (SIA), a technical service available to the Air force.

The SIA gave a good bill of health to the photo, and the sighting was reported by the RNA in its issue of November, 1960. It is remarkable that never before or after have the Armed Forces made public the results of a UFO investigation.

In the years to follow, many examinations of this photo have been done except, perhaps, by the so-called debunkers, and no negative options have been voiced.

There are two interesting details in the photo which must be emphasized. When Capt. Niotti saw the object, his perception was of a uniform color; thus, he was surprised –after developing the film— that in the photographic image the base of the cone is a dull black, without any gradation of color in spite of being oriented toward the sun, which was hidden by the clouds. The rest of the cone appears much lighter, to the point that it is sometimes difficult to obtain copies showing it clearly, due to the high contrast between the base and the sky background. The edges of the base, in the original negative, appear sharp and well-defined, even more defined that other elements appearing in the photograph. It seems as if the base of the cone were a total sink of radiation, reflecting no light.

The copy of the photo presented in this report is from a second-generation negative, and its quality does not compare with the prints made from the original negative.

The other anomalous detail in the photo is the presence of a horse whose head is turned around, its attention apparently drawn by the object. As anyone familiar with a rural environment knows, horses kept in pastures near roads become totally indifferent to traffic and will not interrupt their grazing for the presence of a car. Nevertheless, the horse seems to be looking directly at the object, placed halfway between him and the road.

The existence of the horse is fortunate, as it has allowed some estimates of sizes and distances. The Argentinean investigators have performed some photogrammetry using the original negative, and report that the horse is about 80 meters from the road, which places the object at no more than 50 meters from Capt. Niotti. No wonder he was surprised by the absolute silence!.

On the basis of these estimates, the dimensions of the cone were 7 m. in height and 6 m. in diameter, and it was 17 meters above the ground, in good agreement with the numbers indicated by Capt. Niotti.

But the most interesting detail, which I have reserved for the end, is that Capt. Niotti was extremely surprised when he inspected the copies of the photo and saw the horse, as he had not noticed its presence during the incident. This is a clear indication of his concentration while taking the photo, and his disorientation after the sudden departure of the object when he just jumped back into his car and continued his trip.

Comments by the Author

A case with a single witness usually is not even considered for incorporation into UNICAT, but in this instance we have two circumstances that allow an exception to the rule.

First, we have a competent witness, trained by his profession to observe details, who did not lose his presence of mind when confronted with the unknown. On the contrary, he reacted promptly, snatching his camera and jumping out of his car to obtain a unique graphic document.

And second, the photograph by itself lends enough credibility to the case to make it deserve serious consideration. Not only has the photo repeatedly been shown to be genuine, but it is inconceivable that the Air Force officer would compromise his career with a fabrication that would bring him nothing but problems and discredit. For those who know Vice-commodore Niotti, this option is unthinkable.

From the UNICAT viewpoint, the case also offers some interesting characteristics which confirm its value. Among the many parameters searched for when studying the case, there are two that are considered as particularly significant because of their high statistical incidence. Both of them apply to this sighting:

A third parameter that is not so frequent, but that seems to occur in significant cases, is also found for this incident. It is the RC parameter, i.e., “rounding a curve”. It indicates that the witness suddenly notices the phenomenon when coming out of a curve in the road. REFERENCES: