The witness submitted the following testimony, which is unedited and appears how it was submitted:

“I became interested in orbs after one showed up in a picture I took of my daughter on her 5th birthday. I began taking video at night (after kids in bed 😉 ) in our woods & saw a lot of activity. One night I was drawn to the river, so I sat down, began a video & saw this small light about 20 ft in front of me above the water.. as I went to stand up and began walking, it was suddenly right in front of me! It was tiny & the only way I can describe it, is ‘other dimensional’ it was almost like you couldn’t quite focus in on it & it was amazing. It was very playful, almost felt familiar? I was able to record it so I know i’m not crazy! I saw the same thing on several occasions. Probably 3-4xs each year for 2 years. Always in the late summer & fall I believe. I’ll attach a few videos. You can see it change colors & I put my hand around it to make sure it isn’t a cobweb reflecting the light from the camera. Whatever it was, it was definitelt INTELLIGENT as it was trying to communicate / interact with me in a playful manner. I came across Damien’s story on Australian Lights & thought ‘finally – this is pretty similar to what I’ve seen’… only his ars in the clouds and not so close like mine. I’ve never met or discovered anyone that had had this same experience & have been seeking information for a very long time now. Damien suggested I connect you all for an opinion, so here I am. 😉 i’m hopeful for some answers or at least some input from a professional. I greatly appreciate it. Thank you & many blessings, Jen”

The video below is also posted on the witnesses YouTube channel titled, “Friendly orb/ energy encounter.”

I have a background in amateur astronomy, using a number of different types of telescopes and astronomical cameras. Since 1965 I have have had a passion for film photography, 8mm and 16mm motion picture film continuing to present day with professional DSLR cameras, lenses, and camcorders both consumer and pro engineering. I am experienced with lighting and the causes of lens flares that occur with different focal length and types of lenses.

Since 2011 I have had an interest in the paranormal relating to orb sightings. In 2015, I assisted a MUFON investigator in New Jersey on several orb related cases he was working on. I provided him photos relating to strange blue orbs that had dots inside the orb. In reality the blue orbs were lens flares common to certain brands of cell phone cameras.

While I have not spoken directly to the witness due to missed telephone calls and no response to questions from my last email, there is enough data in the witness videos and photos to resolve this case.

The witness lives in the town of Alto, Michigan. Alto is an unincorporated community in Bowne Township, Kent County, in the U.S. state of Michigan. The terrain has forest areas, (wooded areas), sparsely located within the borders of Alto. The elevation is approx 1,072 feet above sea level. From any location within Alto it would be a short walk to any wooded area. 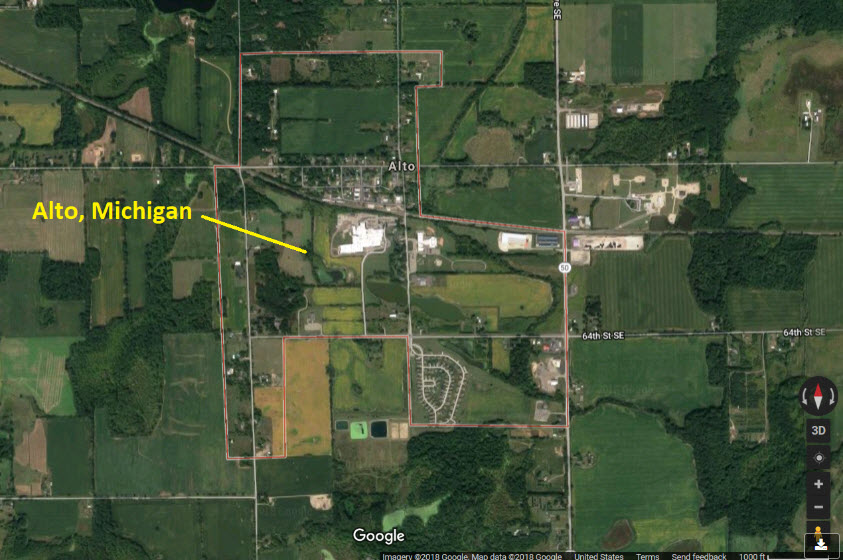 The weather station is located at Gerald R. Ford International Airport which is approx 10 miles N/W of Alto. According to wunderground weather history for this date and approx time the temperature was approx 43 degrees, precipitation for the day was 0.72 inches with light rain falling at the time the witness recorded the video footage, dew point 37 deg, max wind speed of 10 mph from the south, visibility 10 miles. 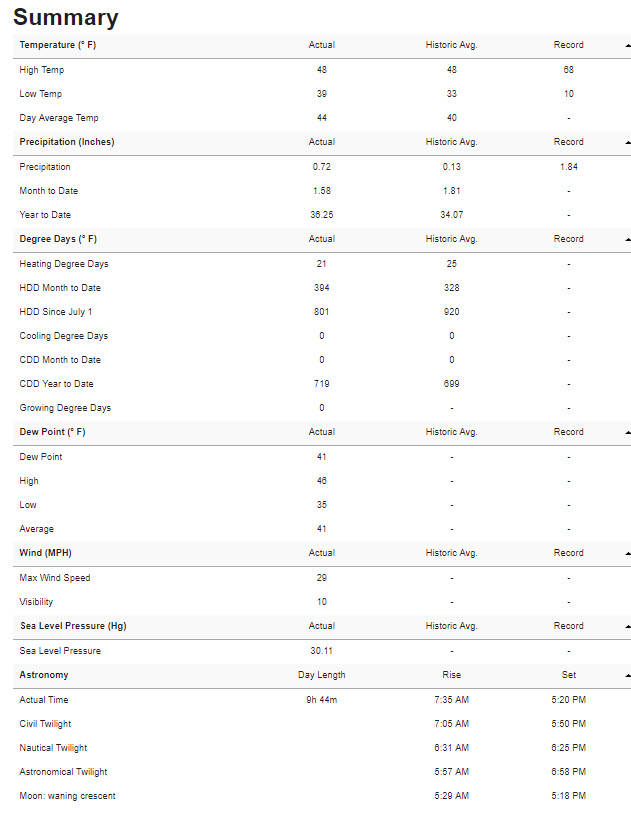 Searching Stallerium, (a planetarium software that shows exactly what you see when you look up at the stars), I was able to go back in the archives to view the night sky over Alto, MI on 11/15/2017 @ 1:00 am. There were no extremely bright celestial objects in the sky. The moon was a waning crescent that rose in the sky at 5:29 am and set at 5:18 pm.

I downloaded both videos to my Sony Vegas video editing software for a detailed analysis of the footage. I was able to view sections of the video frame by frame, adjust lighting and contrast to bring out details in an effort to reveal the possible origin of the orbs.

In the video titled “Friendly Orb”, it is obvious in my analyzed video that the orb in reality is a reflective object attached to a spider web, a balled up clump of spider web or light reflection off the web itself. Other webs are also observed in the footage. The video was filmed in or near a wooded area with vegetation and home to spiders. The object was being illuminated by the video recording device light or flashlight. Reflective areas on a web is a common mistake made by individuals hunting for orbs. As the camera moves it will cause the reflective area to move as well making it appear as though there is a object / orb moving or floating in thin air. With the naked eye one may or may not see anything attached to the web.

The second video sent to TBV Investigations designated, (received_10155980884127518), is a edited shortened version of a video posted on the witnesses YouTube channel titled, (Friendly orb visiting I can actually SEE with my eyes). In my investigation I visited the witnesses YouTube channel to make sure TBV Investigations was receiving the complete unedited video of these events. With the video we received, important footage was missing that led me to identifying the source of this alleged orb. With out any doubt, in reality, the orb is a lens flare caused by a outdoor floodlight mounted on the eve of the building or house to the left of the video recording device. This can clearly be seen at time stamp 1:32 in the video posted to the witnesses YouTube channel. I downloaded the full video but there is no reason to analyze the footage in Sony Vegas. Also the YouTube download has tracking information on the screen for copyright purposes. Additionally, there is no way the witness could have seen this lens flare with the naked eye. 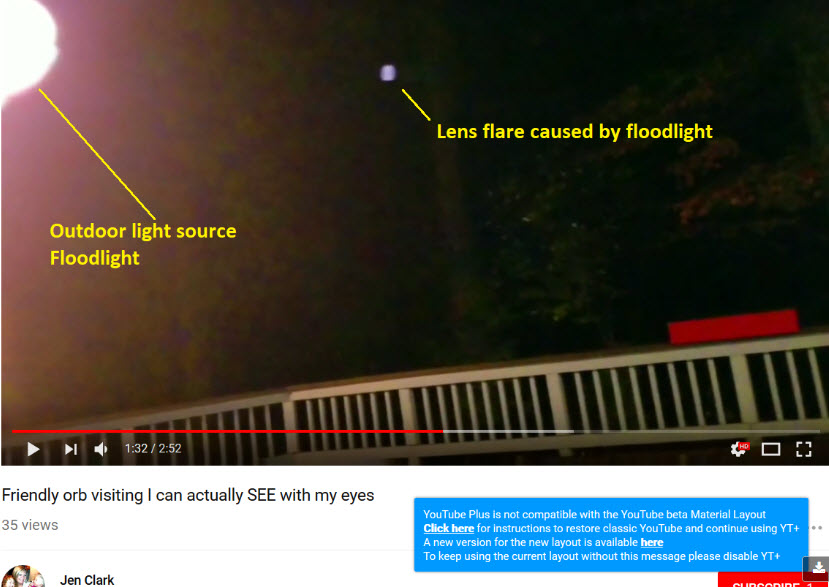 My intention in this investigation is not to upset the witness or anyone who hunts for orbs. I believe the witness is sincere and not attempting any deception. My conclusions are based on the video evidence along with years of experience operating cameras in various lighting conditions. Also observing lens flares and anomalies in my own videos, photographs and other peoples work. My hope is for those who view this investigation take the time to educate themselves on camera operation, what causes lens flares and other anomalies and the effects of lighting in a given situation. There is much information on this topic available on the internet.

In the first video the alleged orb is either a reflective object stuck on a spider web, a balled up clump of spider web or a reflection off the web itself caused by the light from the witnesses video recording device. The spider web can clearly be seen in my video analysis and the witnesses original footage. The second video the witness provided TBV Investigations is a edited version of her video, cropped and shortened in length. Upon further investigation I found the complete unedited version of the video on her YouTube channel. This unedited video showed the light source that caused the lens flare in both versions of the videos. It was the light source, (floodlight) that caused the lens flare.

Additionally, the witness reported the date of these sightings as 11/15/2017 1:00 am however, both her videos on her YouTube channel are dated 12/09/2016 and 10/19/2017 respectively. This fact would make the weather conditions in this investigation void. This fact does not affect the analysis or conclusions of this investigation as the video evidence speaks for itself.

Based on the video evidence this investigation is solved.