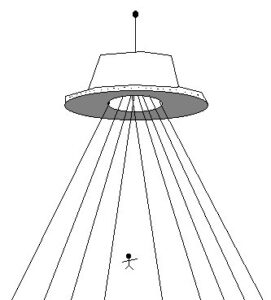 Drawing of Flying Saucer & Being by Witness

Description (In Witness’s Own Words): I saw flying disc land on ground.  A grayish figure came out and grabbed man by the neck and carried him on board the flying disc.  The door then shuts on the disc and it flew away.  I couldn’t get my camera out quick enough so I made a drawing of what I saw.  (See drawing made by witness above.)

Second Report by Witness (In Response to My Questions):  Well I was driving by Food City when I saw a flying disc over top of Food City.  It seemed to be at least 5 feet over top of Food City. I was the only one who saw it though. I lost sight of it when it abducted a man and then flew away.  I haven’t seen that man since.  I haven’t said anything about it or reported it to anyone.  I kept it secret so no one would panic.

Investigator’s Notes: I sent an email message to the witness after his initial report. In my message I asked the witness: Did this really happen?  He responded with his second report above.  I believe that this case is likely a hoax because someone telling the truth would have been defensive in their response.  Also the witness did not respond to some of my other questions:
1. Did the craft make landing impressions?
2. What is your age and occupation?

I suppose there is a slight chance that the event really happened, but a case of this magnitude requires much stronger evidence to authenticate.