Does Video of Black Object over Scotland Show UFO?


The following was published by The Daily Mail. It is archived here for reference: 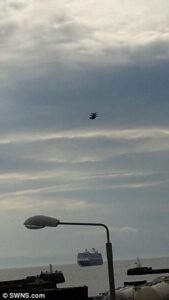 A man is baffled after capturing some truly bizarre footage showing a mysterious black object hovering over a harbour.

Jamie Cooper, from Ayr, Scotland, said his 13-year-old son James spotted the unidentified entity in the sky for around 15 minutes at 5.30pm on Sunday.

The teenager filmed the UFO, which slightly resembles a chinook helicopter, clearly hovering in the distance over Ayr Harbour.

Throughout the 28-second clip the black object stays very still and there are no obvious indications as to what it may be.

Dad-of-one, Jamie, said his son later sent him the footage after visiting a shop and was concerned by what he had seen.

The 33-year-old said: ‘James was walking home when he took the footage on Sunday, and sent it to me through Whatsapp.

‘I have never seen anything like this before, I think it’s a UFO and James does too.

‘I have no idea what I think about aliens, there’s nothing to prove that there is or isn’t aliens but I think this has changed my view a bit.

‘James thinks it was hanging there for around 15 minutes but could have been longer as he wasn’t looking in that direction on his way to the shops, only on the way back.

‘I’d like to know what it was, it’s definitely not something you’d expect to see.’

Jamie has ruled out the idea that the UFO was a drone and is completely baffled by the sighting.

He added: ‘It can’t be a drone because of the shape of it, if you zoom into the picture you can see it’s not a helicopter.

‘My mum and grandparents have seen it and have no idea either.

‘I also let a friend see it as he works at the port, I thought maybe it was something to do with the port. He said he has no idea either.’