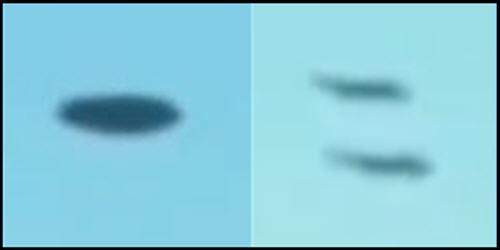 UK Fighter Jets Chase UFO: Is the MOD Covering Up?

By John Greenewald on March 12, 2015 0 Comments
UK Fighter Jets Chase UFO: Is the MOD Covering Up?


Footage on YouTube of two UK fighter jets shadowing a UFO has lead to calls on the Ministry of Defense to either label the video a hoax or respond to escalating fears of a potential threat to national security.

In the news report below, the anchorwoman on British Forces News asks expert Nick Pope if the threat is real or if the video is faked. The answer is vague. Much like the response of the MOD to queries from the public as to whether or not there is a threat to the nation by aliens or, perhaps, by sophisticated terrorists attempting to instill fear.

The original video, which has gone viral, is shown during the interview, and it’s hard to draw any solid conclusions.

The fighter jets, gliding over the skies of Birmingham, look and sound real enough. But the UFO hovers in place and appears to be of the classic saucer variety, without any bright, multi-colored lights or discernible rotation.

It certainly looks like a solid object, but such video trickery is well within the reach of the average video hobbyist, as well as the professional. Curiously, the fighter jets never appear in the same frame with the object, in this video, at least.

That hasn’t stopped true believers from piling on, labeling it genuine and demanding an official response from the British government. Is the UK under attack? If not, why be silent over the video’s authenticity?

What do you think? Is this UFO video fact, or faked? Should the British people be afraid? Is the government covering up?

The following was submitted to me in regards to this case file.  I am posting it here for reference:

Hi, The relevant video is (contrary to the title shown on the video embedded on the Gather.com webpage at the link given above) not new. In fact, it is simply a relabelled copy of a video that I spend a rainy Saturday afternoon in 2010 proving (beyond a shadow of a doubt) was a hoax. I pointed out a few relevant facts, including showing that one of the rather boxy/fake looking trucks on the video had a serial number on its side which is actually the same serial number shown on a 3D model of an identical looking truck being sold online. I posted about this hoax in some detail in 2010 on AboveTopSecret.com. See:http://www.abovetopsecret.com/forum/thread559990/pg1&mem=IsaacKoi

Oh, it may also be worth mentioning that my posts at that link ended with an admission of the hoax by the person that uploaded the video to Youtube. I posted the relevant information on three or four websites at the time, in an attempt to kill this hoax off completely. It seems a bit of a shame (though not very surprising…) that those posts had little impact, judging from the fact the video is doing the rounds again. All the best, Isaac [Gather has taken Rose’s post down –ebk] Listen to ‘Strange Days… Indeed’ – The PodCast At: http://www.virtuallystrange.net/ufo/sdi/program/ These contents above are copyright of the author and UFO UpDates – Toronto. They may not be reproduced without the express permission of both parties and are intended for educational use only.

Special thanks to Errol Bruce-Knapp for the above.