UFO Witnessed While In Flight from Las Vegas to Indianapolis – June 12, 2018

The witness submitted the following testimony. Only minor corrections were made for clarification:

“While flying back from [Las Vegas], heading due east toward Indianapolis I was taking a video of [lightning]below. When I watched the video, I noticed a rectangular object flying by, turning from a bright white to a mild green color and made a noise going by. This was somewhere over western Indiana. At 40,000 feet altitude, I have no idea what this might be. Note: The video shows the object going up, but in reality it is going from left to right.”

The following video was submitted by the witness. It is displayed here, unedited and in the original state it was received:

Witness Pat Alles’ statement contained helpful pieces of data relevant to this investigation and included video of the reported event.

The witness reported that they were traveling on Southwest flight from Las Vegas, NV to Indianapolis, IN. Based on the provided information, I believe this is the flight the witness was on, noted below. The flight departed McCarran International Airport in Las Vegas, Nevada on June 11, 2018 at 8:01pm local time. The flight landed at Indianapolis International Airport in Indianapolis, Indiana on June 12, 2018 at 2:21am local time. The witness’ approximation of June 12, 2018 at 1:00am appears feasible, and any time discrepancy may be accounted for due to time zone changes. 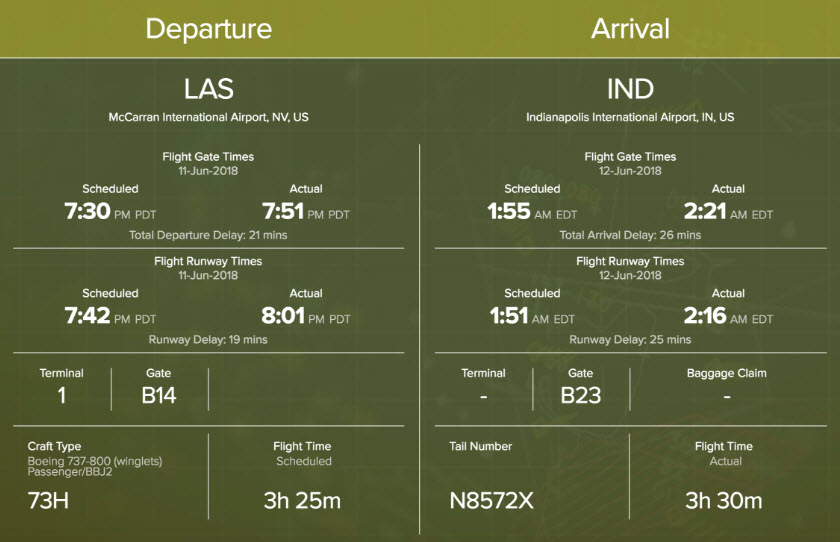 It seems likely that a potential event over “Western Indiana,” as the witness reported, would have occurred between 1:00am and 2:00am EDT on June 12, 2018 due to the flight path of the aircraft noted above.

Weather is frequently a factor in witnessing an unexplained aerial event. The witness reported recording lightning in the clouds below the plane. This lightning is viewable in the provided video. As you will note from the weather history below, it does appear that there were clouds and rain over Indianapolis in the early morning hours of June 12, 2018.

Despite the weather being unfavorable for viewing aerial phenomena from the ground, I conducted a search at the National UFO Reporting Center website for reports in the evening hours of June 11th and the early morning hours of June 12th near the State of Indiana. Reports for the month of June 2018 can be viewed here: http://www.nuforc.org/webreports/ndxe201806.html

There is only one report with information matching the date and location mentioned by the witness.

The event reported to the “National UFO Reporting Center” lists the date and time as “approximate.” As such, I do not know if these are related sightings. They seem to describe different events.

The video provided by the witness is 10 seconds in length. In the first few seconds, there is what appears to be flashes of light that were confirmed by the witness to be lightning in the clouds below. The object in question appears in the video around the 3-second mark. It appears to travel from the lower left to the upper right portion of the screen. I slowed down the anomaly and captured the 17 frames where the anomaly is visible. I created an animated .gif with these 17 frames, as seen below. I put a red line diagonally through the screen to accentuate the fact that the anomaly is not going in a straight line. Around Frame 03 and 04, the object appears to flutter or float closer to the red line, then again moves away from it.

Although not conclusive, it seems unlikely that a potential UFO flying at high speed would flutter or float. This information may indicate that the light colored anomaly is a piece of debris in the air outside the airplane illuminated by cabin lights, or possibly a reflection of something inside the cabin onto the multi-paned window of the airplane. Further, I believe the light colored anomaly is out of focus because the witness was recording lightning far below and the debris flew close to the window or was a reflection fairly close to the window. If the camera were focused far below, something close to the lens would appear out of focus, and the lens would not have had time to focus before it was out of view.

Here is a clip of the same video, with brightness increased:

And a screen shot, possibly indicated an arm illuminated by a smart watch / Apple Watch? This is not conclusive, but one possibility.

Increasing the brightness also reveals the witness did not have the camera lens flush with the window, which opens up the large possibility the light was a reflection from within the cabin. The light source in the following freeze frame is the lightning, and the cut off to the left and the arrows indicate the edge of the window, which allows a lot of ‘room’ for reflections to take place on the window pane and reflect back into the camera offering an illusion of an object outside the plane, like a UFO.

The witness also indicated that the visual anomaly was accompanied by a strange sound, a sound that the witness attributed to the possible UFO.

A visualization of the unedited audio from the video appears as follows.

After some editing, I was able to reduce some of the background noise created by the plane’s engine. The visualization of the EDITED audio is as follows.

My edited audio can be heard here:

While recording lightning below their commercial flight over Indiana, witness Pat Alles recorded a light colored visual anomaly and accompanying audio. Upon investigating, the reported date, time, and location appear to be correct based on developed flight information.

Upon analyzing the visual and audio portions of the provided video, several items were noted. I do not have any reason to believe that the video has been falsified or tampered with in any meaningful way. It may have been cropped from a longer video, but this does not affect this investigation. Based on the fluttering behavior of the light colored anomaly and it being out of focus, I believe it is a piece of debris outside the plane’s window. After editing the video to reduce some of the plane’s engine noise, the audio accompanying the video appears to be that of a human female voice.

It seems likely that this is not a UFO and is explainable.