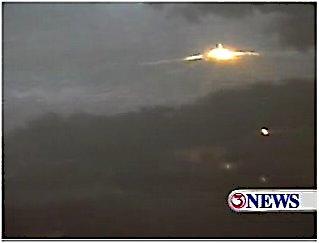 ALICE–One lady says she saw something very unusual in the sky last night near her home. The woman believes it was a UFO, so she called Three News to investigate it.

We have received several calls about UFO’s ever since we aired a special report in February. This woman said she was a non- believer, but after last night’s encounter, she’s now a believer.

Here in the Rancho Allegre neighborhood in Alice located off of State Highway 281 and 44, an Alice resident said she saw something in the sky, while doing her laundry on Monday night. So she grabbed a camera phone and took a picture.

She said this is what came out. On the horizon, she saw this bright light hovering with what seemed to be a reflection below it. Seconds later, she said it disappeared totally.

The woman wants to remain anonymous, but believes it may have beem something other than just a bright light.

“It’s possible it could be,” said the woman. Off camera: could be? It could be a UFO. We don’t know.”

The woman said people who have spoken with her present two theories. Either it’s a full-moon or an airplane flying over the area, but there was no full-moon Monday night.

“I don’t think that’s possible for either one of those,” the woman said. “It’s definitely something, I don’t what it is myself.”

When this woman went to work, she said it was the talk around the water cooler.

“Some are still not believers, though,” the woman said. “Some think it’s light, but they don’t think it’s a UFO.”

This 3 News viewer said she’s definitely curious over what she saw over the sky here in Rancho Allegre. She wants someone to investigate this sighting to see if it was, in fact, a UFO.

‘Well, I would like someone to investigate it definitely because now I’m curious,” said the woman. “I want to know.”

So she plans to call one of the groups to find out if this was something out of this world.