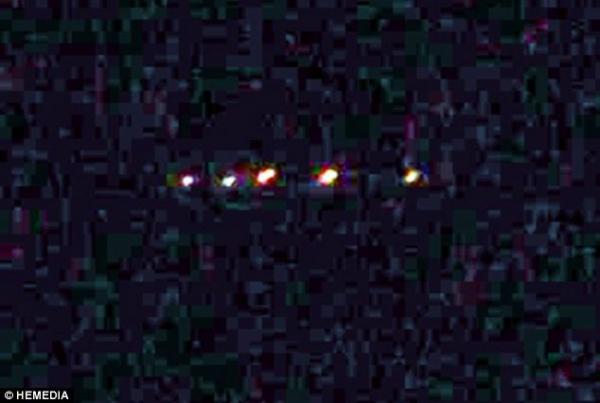 A family has spoken of the terrifying moment they saw a UFO hovering above their house for four hours.

Morag Ritchie, 50, was awoken in the middle of the night by flashing lights in the sky over the family home in rural Scotland.

The grandmother-of-one woke her family up and her daughter’s fiance caught the shocking images of four blinking lights on video.

Morag said: ‘We live in a very rural area so I never have my curtains closed and I like looking at the night sky.

‘I just woke up all of a sudden and looked out of the window to see all these twinkling lights – they looked like they were moving.

‘I was quite apprehensive about it. I’m standing there looking at it and I’m thinking “is it watching me?”, so I went around the house telling everyone and they all came to have a look.’

Mrs Ritchie describes seeing a circular object hovering and spinning around above her home in Fraserburgh, Aberdeenshire.

‘My husband is a fisherman and he’s spent many hours looking up at the night sky, so he was quite sceptical when I told him, but even he admitted it was strange when he saw them.’

She says: ‘Eventually we all went back to bed. I woke up a further two times, the second time was about four hours later and it was still there, but when I next woke up it was daylight and they had gone.

‘It was there for so long that even all the way out here, someone else must have seen it, but perhaps they’ve been too shy to come forward about it.’

Morag’s daughter, Cara, 27, had got out of bed to feed her baby at 3am on Saturday night when she first heard about the sighting.

She said: ‘At first I thought it was just a plane, but my mum said it had been there for a few hours and there was no noise or anything.

‘I was quite mesmerised by it all to be honest although my fiance Scott, was pretty scared.

‘He was smoking at the back door where you could see the lights from and he was genuinely frightened, he kept the door half open so he wasn’t actually fully outside.’

‘But this was really really strange. After seeing what I’ve seen, I’m genuinely wondering if there are actually aliens out there now.’ 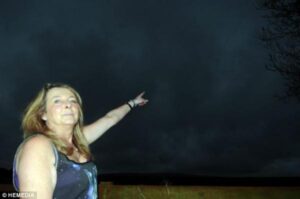 Right there: Morag Ritchie in their back garden pointing towards the part of the sky where she saw the UFO on Saturday night

Although 95 per cent of all UFO reports can be explained, UFO expert Malcolm Robinson admitted he was baffled by the footage Scott captured.

He said: ‘I’ve looked at the footage and there appears to be four lights in a line intermittently flashing which could be anything.

‘But it’s strange. Many suspected UFO sightings are actually Chinese lanterns, but it’s not them this time – no way.

‘It’s very interesting to a researcher like me but at the moment we won’t have any answers for a couple of weeks at least when I find out if there were any other sightings or aircraft in the area at the time.’

Civil Aviation Authority spokesman Tony Finnegan said: ‘It could be a light aircraft or military aircraft, but at 2am in the morning, it’s unlikely to be civilian.

‘We aren’t able to find out what aircraft were in the area at the time, but there was increased activity of northern lights last week, so I suppose they would be a possibility.’