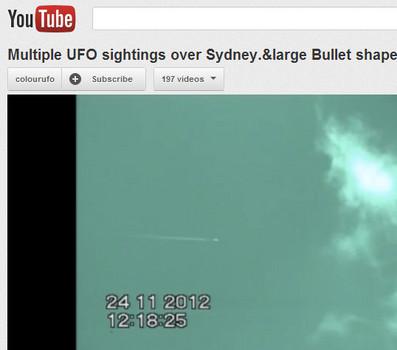 Is it an alien spaceship or a top secret military plane? On Saturday, multiple UFOs were spotted flying at blazing speed over a sunny sky in Sydney. You can watch the 22-minute clip in this YouTube video.

A bullet-shaped UFO was seen flying over relatively clear skies over Australia around lunch time on Nov. 24. It appeared to leave a white trail suggesting that the object may have been a high speed military aircraft.

However, a round object can be seen zipping through the sky just minutes later. The second object, shaped like a flying saucer, did not appear to leave a white trail that airplanes typically leave at the rear.

The object also appeared to move at blinding speeds just above the clouds and possessed the ability to rapidly change directions. Aside from observers on the ground, a nearby pilot spotted the UFOs near Queensland, Australia.

Is it an alien spacecraft? Watch the video and you be the judge.