The following report was collected by the late UFO researcher Kenny Young. It is archived here for reference: 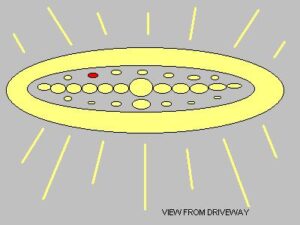 A lighted, disc-shaped object with a hump was seen hovering silently over homes near Amelia, Ohio.  The object, which moved in a bizarre fashion said by witnesses to “drop and stop” near the East Fork vicinity, was sighted by at least three separate persons in Clermont County at 2:58 a.m., early Monday morning, January 12.  Also seen was a shadow that ‘transformed into a ball’ — one person describing a peculiar tannish-brown object, separate from the lighted UFO-which strangely ‘rolled down the side of a house.’ The sighting was first reported by one of the witnesses to the Cincinnati UFO hotline on Monday, investigation of the incident has turned up additional witnesses to the incident.

At 2:58 a.m. on Jan. 12th, 2004, 21 year old student Susan T. (name and phone number on file, deleted for this report) and her neighbor Jeff F. were in Susan’s driveway when they spotted an object high in the sky.  Susan states that the object was hard to describe but said it was disc shaped with a “hump” on top.  Susan said that at one point the object stopped and began to “drop.” She thought it was going to hit the ground.  However, it suddenly stopped and hovered and then it began to drop again.  For several minutes this object “stopped and dropped.”  She finally lost sight of it as it went below roof top level of her house.

Susan went on say that this object must have been “covered in a million lights” and also said there was a red rotating light on the top of the hump and white lights on what she described as the belly or bottom of the object. She claims that the object seemed to turn on its side so that she could see the bottom part. This turning or flipping caused the object to look like it was changing shapes and getting bigger.  It was when the object turned up that the “bottom” was covered in white lights that dimmed then grew brighter and changed patterns.

Susan said that the object was — from her perspective-larger then your thumb at arms length.  She does not know how far away it was but said it may have been over as far as State Route 222. (There are several streets between there; Lumsford and Eiler Lanes.) She said the object may have been in the vicinity of the Phantom Fireworks Factory on Route 125, somewhat to the west of her location.

Susan explained that she felt she was being watched and grew very frightened.  Both she and her neighbor(Jeff F.) sat in the truck and watched this object for over an hour. It was 4:15 a.m. when it finally slowly went down behind her house.

Susan then stated that something very strange happened.  Right after the object went behind her house she saw what appeared to be a “shadow” on her roof that turned into a ball and rolled down the roof.  She said that her neighbor also saw the shadow.

Being very frightened neither person went behind the house to see where the object went.  Susan feels that it did land or almost land.  She also said that they did not see the object leave because she ran in into house after it went below the roof level and did not look anymore.

I asked if there was any adverse reactions by the animals in the area when the object was in view and Susan said that dogs on the other streets were going wild when the object came down close to the ground.

The second witness was then contacted for his comments on the report.  Jeff F., a 45-year old disabled resident of Amelia, states that at 2:58 a.m. on Jan 12th, 2004, he and Susan were sitting in his truck in her driveway when they spotted the object hovering up over behind Susan’s house.  The object was up very high. They watched as this object began to drop very fast.  It then stopped and hovered and then dropped again.  This all happened very quickly.  Jeff F. states that he looked away for a second and the light was back up in the sky in the same spot where they first saw it.  It dropped and stopped again.  This happened two times.  Jeff F. says he does not know how big the object was but it had a slowly rotating red light on top.

I asked if there were other lights and Jeff said that he did not see any other lights nor could he tell the shape. He said they watched this object for an hour while they sat in his truck.

Jeff said this object eventually began to descend behind Susan’s house.  Just as it went out of view a very weird thing happened.  Jeff F. said that a “light tannish brown shadow that turned into a ball about the size of a cantaloupe” rolled down Susan’s roof.

“This happened so fast it was unbelievable,”he said.

When this happened both became frightened and Susan ran in the house.

Both parties told me that there was a garbage truck coming down the street at the time the object was in view but they do not think the garbage man saw the UFO.

Jeff F. and Susan’s stories differ in some aspects.  Both witnesses sounded sincere in their claims. Susan still sounds upset about what she saw and expressed to me that she has received little sleep since her sighting.  I find the incidentwith the “shadow” very curious.  Both people expressed to me that it was “something” other then just a shadow, but “shadow” was the only word they could find to describe it.  It seems that this “shadow”upset both witnesses the most because the object was too far away to cast any reflection on the roof.`

Susan is a 21 year old student at the University of Cincinnati.  She is out of school for the winter butwill be back in school for the spring term.  She is taking courses(30-hours per week) to be become an RN.

45-year old Jeff F. is now disabled but was formerly employed as an industrial engineer.

Susan informed me that she sometimes has trouble sleeping and she and Jeff F. will sit in his truck to talk so as not to wake her family.  That night they had spotted the UFO.

Through various telephone inquires of neighboring residents in the area contact was made with one other possible witness.

A resident from a few blocks away (Eiler Rd) spoke with me by phone (name and phone number on file, withheld from this report) and said that around 3:30 a.m. on Monday morning, January 12, she looked out her window towards the West and saw a bright light in the vicinity of State Route 222.  She did not know how high this objectwas but said it was a very big bright light above the trees. She said that from her perspective, the object was in a westerly direction toward the lake (East Fork).  She could not give a clear estimate of elevation but claimed to have watched this object for a couple of minutes. After it allegedly disappeared she went back to bed.

The time and date of the claimed sighting, plus general location of the alleged object, matches detail furnished by the first two witnesses from Yelton St.

I contacted the Clermont County Sheriff’sDept. at 513-732-2231.  No UFO sightings were reported to them during this time frame.

Next, I contacted the Bethel Police Dept. at 513-734-2256.  No UFO sightings were reported during thistime to them.

Additionally, researcher Kenny young placed a call to the Clermont Sun Newspaper “465 E. Main St., Batavia,Ohio, 513-732-2511.”  He spoke with the editor, Art Hunter. He was told they had not heard of any UFO sightings.

Next, Young contacted the office at East Fork Lake State Park 513-734-4323.  The telephone receptionist,Sandy, said she was completely unfamiliar with UFO sightings around the East Fork State Park vicinity.  She did inquire about the witnesses. She explained that she would pass the information along to the supervisor,others in the office and the park rangers who patrol the lake at night. She took Young’s telephone number and e-mail address and attached them to her report.  Young said if anyone had information about this story to feel free to contact him.