The following report was created by Dylan Santiso of TBV Investigations.  It can not be reproduced in any way, without prior permission.  The photographs are copyrighted to their respective owners. They are used here under fair use, as they were originally posted publicly on various media outlets.

Video screen grab of the “UFO” reportedly seen in Russia.

“First, there was a bright spot in the sky, then came the light – similar to that of a spotlight – and then it exploded. What was it?”, a witness to the Lipetsk sighting asked, as reported by RT.

A similar sighting was noticed and reported by many in Los Angeles, California and surrounding areas.

As reported by the New York Post and others news media on December 22, 2017, “A space satellite launch sparked a brief UFO scare in Los Angeles Friday night after startled viewers gawked at an unidentifiable streak of light soaring across the night sky.”

It turned out that the Los Angeles sighting was a Space X Falcon 9 Rocket Booster. The Los Angeles sighting is near identical in description and video accounts to the Lipetsk sighting and shares many of the performance characteristics that have been seen, videoed and photographed in sightings of similar nature around the world, which are usually near military and corporate launch pads.

The Los Angeles sighting footage can be seen here:

In this case the videos and pictures say it all. This is some type of rocket that was seen under the correct circumstances that caused the object to illuminate. The “bright spot” followed by the “explosion” was almost certainly caused by the jettison of a Russian Rocket Booster.

Further evidence is shown by a post on the popular Space.com website, archiving the space launch activity throughout the globe on specific dates.  On the day this sighting took place, Space.com reports on their Space Calendar: 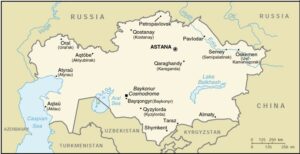 Location of Baikonur Cosmodrome, source of the rocket launch, in Kazakhstan and where it lies in relation to Russia.

Dec. 26: A Ukrainian Zenit rocket with a Russian Fregat upper stage will launch Angola’s first satellite, the AngoSat communications satellite, from the Baikonur Cosmodrome in Kazakhstan.

The position of Kazakhstan in relation to Russia, coincides with the location of the sighting (just south of Western Russia) and potentially the flight path of the rocket.  The exact path and direction of this launch was not found for this report, but we feel confident that this solves this case, as the time and dates (and physical descriptions) match.

We believe that given the above evidence, we can mark this case as solved.