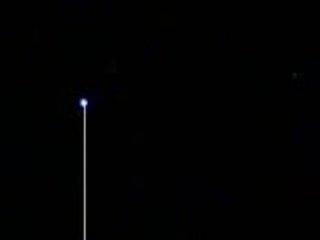 Residents of Rosario became witnesses to further UFO activity on the evening of January 30 and the early morning hours of the 31st. Initial eyewitness accounts describe lights seen at 23:30 hs. over the facilities of the Alto Rosario Shopping Center located between Av. del Valle and Blvd. Avellaneda.

Witnesses in the area described the object as having glowing white light and apparently suspended halfway above the center, engaging in a swinging motion and shooting off beams of light against the ground.

Local residents, who saw its maneuvers clearly from their balconies and the way it fired off the beams, saw the object as early as 23:30. A second object, yellow in color, was seen later on, moving slowly over the city. The first object was seen again around 1:00 a.m. on January 31st.

The second object caused a commotion due to its low altitude, low enough to cause cars to stop moving. Eyewitness accounts suggest that the traffic lights appeared frozen on “red” and cellphones employed to photograph or record the object were left with grey screens and drained batteries.

All accounts agree that the object was nothing known to the witnesses, exemplified by the recording released a few days ago by a young Rosario resident taken in 2007, and which caused such public commotion.

Given the number of reports, the Vision Ovni team looked into the case, as it did with the recording from 2007, and through one of its researchers, Elias Kolev, contacted several witnesses to establish parameters regarding what was observed.

This case opens the possibility of obtaining specific evidence, since according to those who saw the objects, there is relevant information such as the interference with the traffic lights. In a conversation with expert Salvatore Carta, there is physical and mechanical action involved in the operation of these traffic control signals.

According to Kolev’s initial consultations with the Dirección de Control de Transito (traffic control office), when traffic lights are faced with a power shortage, they enter an “intermittent” (blinking) phase. A specialist from this state agency will be interviewed on Monday to secure details on the specific operating mechanism of these devices.

Moreover, cellphones were left blank and drained of power. This did not occur in all cases, only in some – a situation that requires specific study to ascertain these failures.

This case has acquired special importance for Visión Ovni and everything suggests the existence of elements of major investigative value in the region. We hope to provide you with the results of this research.