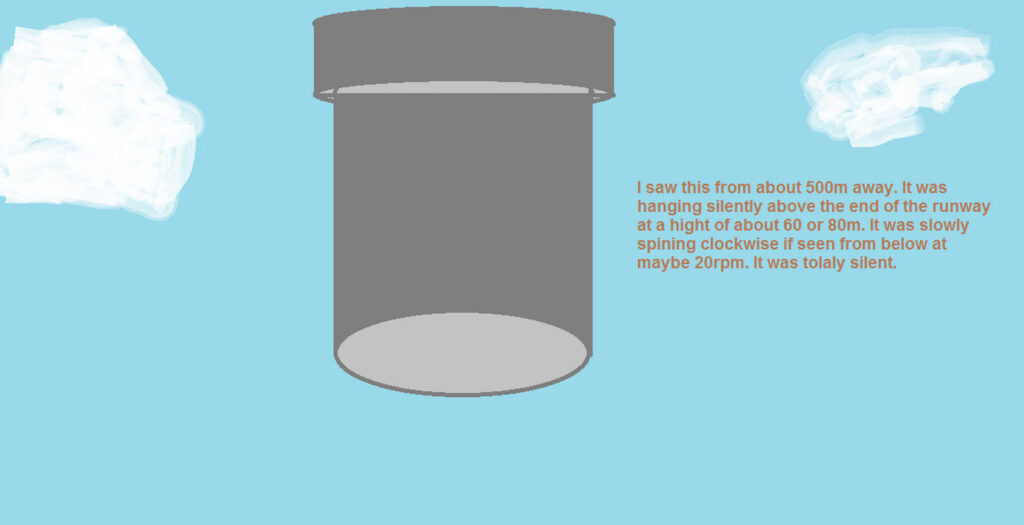 The following was submitted to The Black Vault, and is used WITH PERMISSION. Special thanks to the witness, who wanted to remain anonymous, for their submission.

My work at the time was classified and I don’t want to get other people into trouble.

The Weather was very good that day and there was very little or no cloud.  We were looking up at an angle of 60 to 700 . The sun was bright and high behind us.

I was working as a senior aircraft weapons engineer for BAE Systems at Warton aerodrome Lancashire, when; –  I saw what can only be described as a UFO.  Unidentified flying object: – Man-made or Alien?? Who knows????

The best description I can give is to say imagine a 40 gallon steel drum hanging noiselessly in the air and spinning slowly about its vertical axis.

Please see the picture to the right to give you some idea as to what I saw.

This picture shows a very similar object, but I /we were closer, and the object looked about twice the size of this one. This YouTube clip shows the same thing that I saw:

See Below for more detail. I saw this from about 150m away, (Not the 500 as stated in my drawing); it was hanging silently above the end of the runway at a height of about 60 or 80m. It was slowly spinning clockwise if seen from below, at maybe 15 or 20rpm. It was totally silent. It was the colour of unpainted aluminium. Its size is hard to say, but I would put it as a similar size as a small aircraft say 5m across X 10 or 11m tall.

The circumstances of my sighting were even stranger than the sighting it’s-self.   It started when a colleague and I were returning from the other side of the airfield. We were waiting for a staff bus that they use. We were idly talking about a sci-fi TV programme that was coming on, when my friend said “What would you do if you saw a UFO”. And I said “What like that one”, and I pointed up at it.   That’s when it gets really funny. You would think that we would be freaked out over it, but; we just calmly stood and watch it then we got on the bus and carried on with our work. (I can remember still seeing it as we drove past /under it in the bus, but I can’t remember it leaving.)

The only other person on the bus was the driver, and he either didn’t see it or it never registered with him. (He never said anything!)   It was two days later that the sci-fi programme came on TV; and it must have jogged my mind. I realised what had happened and that we hadn’t spoken about it. It was as if it never happened.   Looking back on it, I /we must have had some missing time, we should have been back into the office by 14:00 at the latest, but all I can remember is having a quick coffee and it was time to leave i.e. 17:00. After the incident I became ill. I suffered from a bleeding nose, something I had never had before. Sleepless nights, and a rash around my groin. I also had a protracted episode of going giddy and forgetting things. This was so bad I ended up having to give up my job.

I still don’t know what happened, but I know that my friend was also very ill, and he also lost his job though illness. From my point; I’ve developed a large interest in the paranormal. Remembering that I was an Aeronautical engineer this in its self is strange.  The other very strange thing is that we didn’t find it necessary to talk about the experience. We just calmly went back to work and never said anything to each other about it. When we did talk about it (Two days later). We found we had the same memories. We both remember waiting for the bus.

We remember the object and the bus ride back to work, but neither of us could, and still can’t remember working the next day or the afternoon directly after the incident.   It’s all a blank, right up until the TV programme. It was the same for my friend up until I spoke to him at work he had no recollection of the incident. We had gone about our days without any trouble and without any idea that anything had happened.

I believe I’m a well-rounded individual and after 10 years in the RAF and 20 working in industry working as an engineer I don’t go in for flights of fancy. That being the case I would love to know what this was, and what happened that day. If it was man made; ‘I would love to speak to the people that made it’. I can’t begin to imagine what the power source was, or how it was made?

This is the best and the fullest description that I can give. I hope it makes more sense to other people than it does to me.

P.S   When I was about 7 years old I have a very faded memory of seeing a UFO before, “but I was a child”, so it may be a false memory. I would not like to make a record of it as I can’t guarantee that it was real.   We lived in a very small village in Worcestershire UK. It was back in the autumn of 1962ish. I remember it being cold and misty. I was sitting on the church yard wall overlooking a field. I have a vague memory of feeling giddy and slightly queasy.   Looking across the field I could see what looked like a silvery /white round craft standing on three or four legs.

It was a long way away, and difficult to make out, but I remember seeing four small figures dressed in grey coveralls and what looked like grey baseball hats.   They were walking around the craft looking at the grass and poking at it with what looked like thin sticks. One of them then pushed what looked like a thin ‘T’ shaped rod into the ground (the sort geologists use to take core samples with).

I then have the feeling that they noticed me, as the one with the ‘T’ shaped rod looked over towards me and then the whole scene shimmered and vanished. I can’t remember my feelings or anything else. Also I had no memory of this until after my sighting at Warton.   I can also remember waking up as a child with marks on my arm and thighs that I can’t account for.     Anyway thanks for taking the time to listen /read this. Hope it might help someone else.

I’d like to speak to other researchers if you think it would useful. It would be good to get a new perspective on my sighting and the subject as a whole.