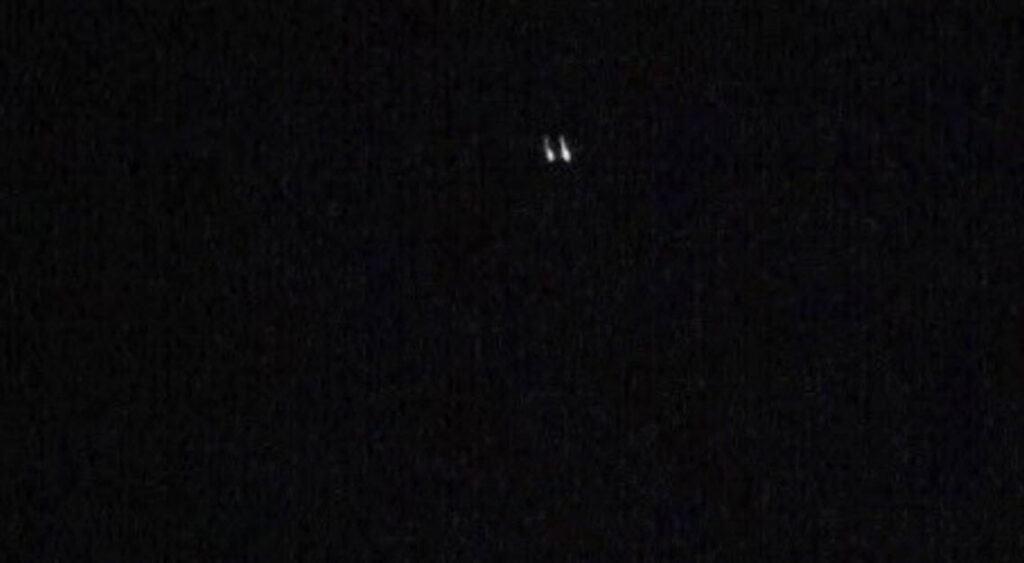 UFO Picture Taken While Driving on I-76, Between Akron and Lodi, Ohio

The following was submitted anonymously to The Black Vault. It is used with permission. There is to be no reproduction without permission.  If you have an opinion on the object, please comment at the bottom of this page.

Hi there John my wife took this photo while we were on our way home from college about three years ago and still am not that sure what it is. These two lights were very bright, so bright they could been seen clear as day from over a mile away. The highway we were on was I-76 heading South from Akron to Lodi about 1 mile from Lodi. It also couldn’t have came from any modern air craft due to it not having any flight indicators and not making any sound what so ever.

On top of that the object was directly above the median of the highway about 200 to 300 feet in the sky. Some of my friends have came back and said that it was a blimp but after we went under it going at 70 mph the craft was gone and I couldn’t find it anywhere in my rear-view mirror in which I should have been able to see it in less than a minute in which not allowing a blimp to move that far.

Note from The Black Vault: Originally, I offered the witness the following response:

I am not sure if this helps, but I thought I would add this.

I have seen quite a few photos like this, and I am going to use a trail camera case that was caught a year or two ago on camera. Although it is the reflection of the eyes of a deer in the camera lens, I feel the effect is the same. Check out: http://www.nbcnews.com/science/weird-science/caught-headlights-experts-explain-deer-cam-ufo-n76156

I think what you are seeing, are the two lights of the oncoming car, and the bright headlights. They create an effect in the lens of the camera.

If you edit the photo and move the lights over the car, they appear to be a match when it comes to distance apart, relative to the car.

I hope this is a valid theory and of interest to you. I am not trying to diminish what you saw, but it does seem similar to many other solved cases.

However, their response was the fact that the object was seen with the naked eye, and if true, thus rules out a reflection in the camera lens or on the car windshield. Their response was as follows:

Well first me and my wife were able to visually see it with the windows down and on top of that we were able to see it in the geographical location while we were going around a curve disproving the theory of a holographic reflection on the windshield.