UFO Photographed in the Clouds over Stockton, California

On October 26, 2018, this case was submitted to The Black Vault. It was assigned to TBV Investigations’ research Jeremy Enfinger for analysis.

The witness/photographer submitted the following information:

I was picking my grandchildren up from elementary school when I noticed everybody looking up in the sky I too looked up there and saw what I saw on the photos. The sighting date listed above (in the initial report) is wrong it was in 2014 I believe it was April. I couldn’t change sighting date on your program.

The sighting was reported to have occurred near the intersection of Thornton Rd. and Estate Dr. in Stockton, California around (or near) April of 2014. Four photos were submitted of an anomaly in the sky witnessed by multiple people (appearing in some of the photos).

Metadata analysis indicates the images are the original files, and EXIF metadata was able to be extracted. The image was taken from a Samsung SGH-T599N (5 MP) at a resolution of 1920 x 2560 pixels, using automatic exposure control with ISO 50, an exposure time of 1/2915 sec and an F-stop of 2.7. With the jpeg quality being 97%, there is no indication that the image file has been compressed. The flash was not utilized.

The time stamp on the metadata indicates it was taken May 9, 2014 at 14:14 hours. Due to initial research, no photo manipulation techniques were employed.

Initial impressions indicated the photo was not manipulated, and no evidence of motion was present when comparing images. There were, however, subtle changes in appearance around the periphery of the anomaly which caused me to consider some sort of meteorological or atmospheric disturbance.

After retrieving the metadata, multiple Google searches for “UFO Stockton, California, 2014” and “Clouds in Stockton, California, 2014” for the months of April and May of that year yielded several results. Image results were found that matched the appearance in these images and multiple news article links varied in headlines from May 9 to include “UFO sightings” to descriptions of cloud formations that can cause this kind of appearance.

After consulting the numerous articles citing this phenomenon, it can be summarized as a “Hole Punch Cloud”, which appears as a large, circular gap that usually appears in cirrocumulus or altocumulus clouds. Also called a “fallstreak hole”, it can happen when moisture in a cloud is at a temperature that’s below freezing, but the moisture itself is isn’t actually frozen. According to the Huffington Post, these formations can also be caused by aircraft passing through certain types of clouds.

Here was a FOX 40 submitted photograph from the same timeframe: 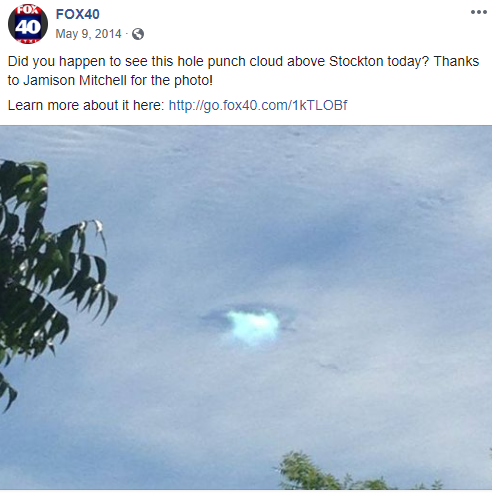 The Huffington Post also ran a story about it: 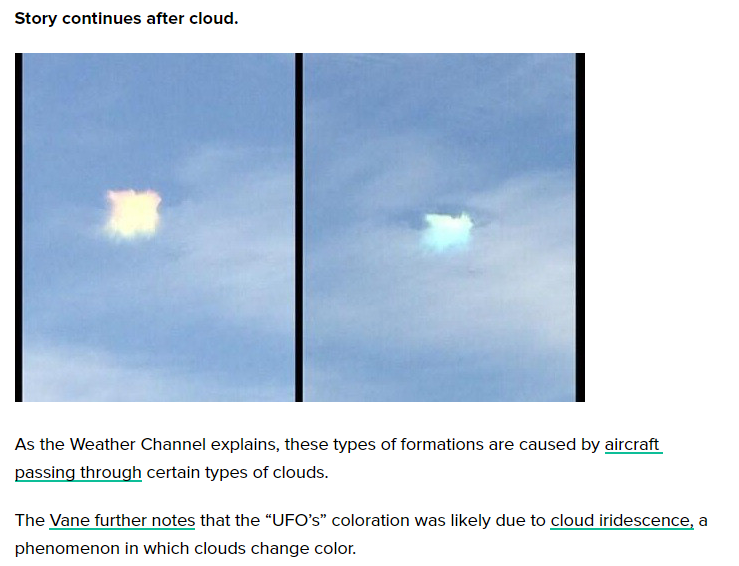 Also CBS Sacramento was another resource that covered it: 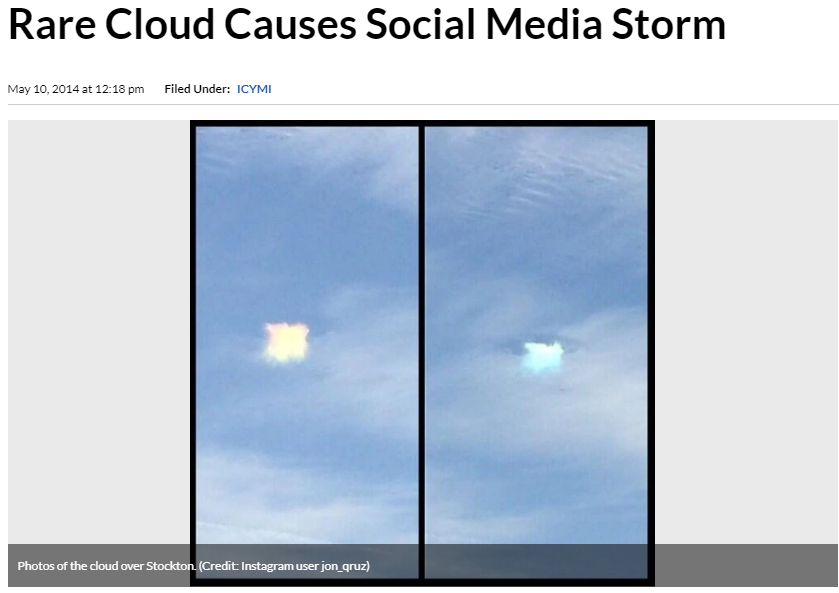 YouTube user MrPhath posted a video of it as well:

Each photo was submitted to Fotoforensics, but for the purpose of this report, I will only include the link to one as the JPEG quality and metadata are corroborated in comparison.

Quality determined from the quantization tables that encoded the JPEG: