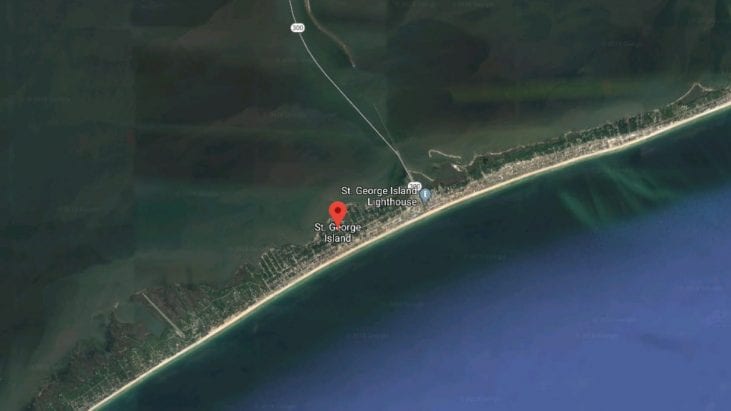 The witness submitted the following testimony with their report. It appears here, unedited:

“10:30PM ON BEACH. WHILE WATCHING SATELLITES OVER HEAD VIA NOTIFICATIONS FROM PREDISAT, I OBSERVED A TRIANGULAR OBJECT, 3 LIGHTS, ONE ON EACH CORNER, MOVING NW TO SE OVER ST GEORGE ISLAND THEN OFFSHORE OVER THE GULF OF MEXICO. OBJECT WAS COMPLETELY SILENT, MOVING AT ABOUT THE SAME SPEED AS A COMMERCIAL AIRLINER. HOWEVER THIS OBJECT WAS MUCH BIGGER THAN AN AIRLINER AND COMPLETELY SILENT. ALTHOUGH I COULD NOT TELL THE ALTITUDE, IT WAS DEFINITELY LOWER THAN COMMERCIAL AIRCRAFT AND MUCH LOWER THAN SATELLITES. CLEAR SKIES ON A MOONLESS NIGHT. DURATION OF SIGHTING: 1 MINUTE”

I emailed the witness a few times, but never received a response, I also attempted to call the him to no avail. However the witness was very good in providing substantial information to this case.

The witness states he used an app called PREDISAT when he observed an anomaly. According to the Google Play store, the app PREDISAT “downloads data for satellite passes and Iridium flares from Heavens-Above.com and formats it for viewing on your device. It also includes a few features to help you spot satellites, such as alerts, countdown, and night mode.”

I personally have never used the app but judging by the reviews seems like it is a pretty useful app for those that like to observe satellites passing by the skies over your area.

Since I was never able to communicate with the witness and there is no actual hard evidence, like an image or his app data, it is hard to analyze the case thoroughly. Yet his statement is very detailed, so I wouldn’t pass it off as totally fake.

This is not the first case reported in this island in fact when I did some research I could back as far as 2009 of people witnessing strange lights and objects in the skies over St George Island, Florida.

If for any reason the witness reaches out again with more evidence or even a sketch I would definitely be updating this case. As for now it will be classified as Unresolved due to insufficient evidence.