The following case was submitted to The Black Vault / TBV Investigation on January 25, 2018, the day after the sighting occurred. The case was assigned to TBV Investigations’ researcher Michael Andrew McLimans for analysis.

“I was on my way to work, I was traveling east on rt 5 just entering Scotia, I saw at least 3 red lights atop one another in the sky, i thought maybe a satellite, but i thought it was too close, I pulled over to try to get it on my cell phone, because it was moving away and dark my phone didn’t really capture the image. I got back in my car and about 20 seconds further down the road I saw something light up in the sky. It looked like a big scoreboard all lit up and moving towards me. I pulled over and started to get a video. The size was big and lights all over, the shape was something I’ve never seen before. It glided right past me!!!! No noise from the craft at all. The design of it has me at a loss for words and I’m anxious to know what the hell was it! No military or airplane that is for sure! I reviewed my video and I believe because of the lights it doesn’t show what I exactly saw but I do have video. I’m trying to draw what I saw. I really need to speak to someone who can help me get a grip on this and go further into detail about this ship that I saw. I know it was below radar because it was that close! When I watch the video I hear strange sounds that I don’t know what made them. The only sound made was a few cars passing by and at time of sighting i did not hear anything at all.” 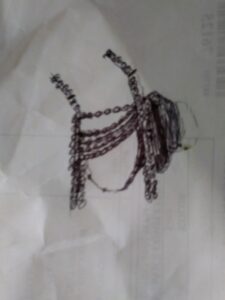 Daytime Photograph of the Sighting Location.

REFERENCE SHOT: The tail end of an aircraft from a screenshot of a YouTube video the witness identified as being similar to what she saw, but with tons of lights.

I spoke with the witness multiple times via phone, text, and email. I’ve analyzed the video at slower speeds and frame by frame. There are 4 objects visible in the video. The moon, an aircraft identifiable by its flashing/blinking navigation/collision lights, a tree in the right side of the video, and what I suspect to be lights from a home, or building in the distance of bottom of video.

This was later confirmed after receiving a daytime photo of the sighting location. The noise in the video not audible to the witness while shooting is most likely interference from the high voltage power lines seen in the daytime photo producing EMFs, Electro-magnetic frequencies.

The object in her sketch doesn’t resemble anything I’m familiar with, nor any typically reported object I’m aware of.

I found the witness to be a very credible witness with knowledge of typical civilian and military aircraft.  When only taking the video into consideration, it is very likely the object is an aircraft, or a drone, as the blinking lights, and the colors of them (seemingly alternating white and red) are indicative of an aircraft or drone.  However, her testimony and firsthand account of the object’s description, coupled with her knowledge about civilian and military aircraft, adds a different element to the case.

Although her video does not contain evidence of the object she describes or sketches, I believe that she saw something she couldn’t identify.

Therefore, I feel I will label this case unexplained, with the caveat that it does lack sufficient evidence (a stabilized video with more detail) to properly identify the object, or to confirm it is truly an “unknown.”

The witness stated additional, uncompressed videos, are being sent. To date, they have not been received.