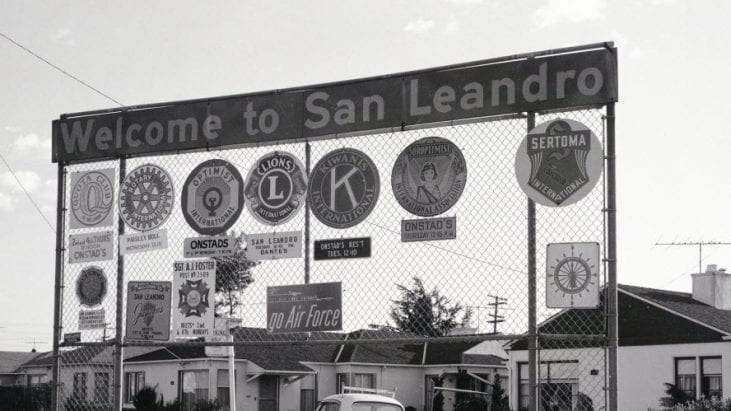 “While my son and I were returning from his job in San Leandro (he was 15 at that time) he said to me “mom, what’s that?” in a very slow and perplexed manner. As I was driving on the freeway, with not much traffic at that time of night in the dark, I leaned forward and looked up, sighting a ‘fleet’ of triangular shaped craft. I saw at least three, very clearly outlined against the sky as there are city lights (light pollution) here. They were flying over a range of semi-low hills in an undeveloped area near the 106th or 98th ave exits going Westbound on 580. He says there were more probably five or more. They were silent and smoothly operating. There were three lights on the bottom of each craft which were white lights. Since we were basically directly under them, I could not see the tops of the craft. About 500 feet up as far as I can tell. They moved silently East over the uninhabited hills (toward the Central Valley). We were stunned, and I did report it to MUFON in 2006 when I found their reporting form on the internet. I have driven myself crazy trying to find anyone else, someone besides us must have seen them. I am pretty sure it was winter months, but a clear night with no wind or precipitation/cloud cover. They were out of sight in a few seconds (maybe 10-15) as the hills are right next to the freeway. I asked my son if we should ‘chase’ them and he said, and I quote: “hell no!” We had no cell phones at the time, and the film would not have come out without a night filter and a proper camera. Date above is approximate.”

On January 6, 2018, Lucy submitted additional details that she recalled:

“I remembered a few additional details after the report was submitted to you. The triangles were matte or dull metallic finish. There was good visibility, with patchy low clouds that night, and the triangles were clearly outlined and highly visible, basically right over our heads. There is an airport near there…Hayward airport (small craft), which often has planes in queue waiting to land, so this is a dangerous place for these craft to be flying. Also the actual place we saw them was in San Leandro between 150th and 106th on the Westbound 580 freeway.

Investigator Tiffany Hahn combed the internet for any reports similar to what you described in San Leandro and the surrounding area. In those searches, she included years from 1995-2005, hoping to find someone who may have seen something similar in that area. She identified a man who lived in San Leandro and collected UFO reports from the area in the late 1990’s and into the 2000’s. She attempted to identify contact information for this gentleman to see if he has gathered information similar to this sighting from anyone else around 2001. However, despite those efforts, no contact was established.

Tiffany then sent over some follow up questions to witness Lucy:

On January 17, 2018, the witness responded with the following:

I drove out yesterday to get a better feel for the exact location as best I could. I have searched for years as you are describing. In answer to your questions:My son and I were driving Westbound on 580 fwy at around 9:25 – 9:45 PM. on a weeknight. We saw 3 – 5 or possibly more (equilateral) triangular craft overhead at around 9:25 – 9:45 PM. Also, the area they were seen may be closer to Oakland than I initially thought. Around Exit 30 Eastbound 580 was as close as I could determine. It may have been more toward Golf Links Road, the hills were pretty close to the road and there were no houses that I can remember. There would have been lights on the ground if there were houses, it was not heavily populated on the East side of the freeway where they passed over us, although the West side of San Leandro/Oakland is densely populated. The craft were traveling from a SW – NE direction gradually crossing overhead. Then once they crossed, they fairly quickly were no longer visible behind the hills, low patchy fog as usual for the area that night, clear visibility. They flew UNDER the low patchy fog and were highly visible.

Yes, all the craft had the same 3 lights underneath, one at each corner. If there were some with no lights I did not see them. I didn’t notice any center light on any of them. Of course, I was driving the car in moderate traffic. I have struggled with this question because it is difficult to judge size. They were smaller than a jumbo jet, larger than a helicopter or small plane. They did not seem to be in a rush, but the way they moved was strange, definitely not conventional. I was initially thinking about 30-50 feet across, but hard to say. I could see the lights on the bottom of the craft very clearly so they can’t have been that high in elevation. In order to fly over those hills with proper clearance I would have to give the hills about 1200 feet to clear them. The lights were close – not like the regular air traffic here. Even the ever-present choppers over Oakland don’t seem to fly that low, and you can’t see their lights so clearly, These lights were much bigger than any aircraft light, and because of the way the craft are built you can see the entire bottom is basically flat, not like conventional craft. Again, they were silent. we opened the windows just to see if they were making noise because they were so hard to believe. Also, I couldn’t see the tops so I have no idea if a ‘man’ could even ride in one. They may have been super high-tech drones. They were very tightly calibrated to each other with regard to equidistance, and their navigation was extremely precise. These were flying at too low an altitude to be conventional Nighthawk type craft. And again, no noise, so not the same propulsion system. Or the same shape for that matter. They cannot have been any other type of known military craft either because of the way they moved. The reason I question the fact of “manned or unmanned” is because from where we saw them, they did not appear to be tall enough for a seated occupant, they were rather flat looking. It has occurred to me they could have been drones, but it does not seem appropriate for them to be flying in that manner in crowded airspace. I have never seen anything like it.

Investigator Richard Kidd spoke to Lucy again on April 24, 2018, and she provided him with some additional information regarding some research she has been doing on her own. She stated that she hasn’t been able to find any other sightings in the San Leandro area that pertain to her and her son’s original sighting that she reported to The Black Vault. She did however, find sightings around the area that were more recent.

Through my conversations with Lucy on the telephone, she is a highly educated and honest witness. I believe that she had indeed witnessed what she reported to The Black Vault. However, other than verifying that where her sighting occurred is an ongoing reporting area, her sighting could not be verified by additional witnesses or by other individual reports.

For this reason, Lucy case should be listed and “Unidentified – Lacks Sufficient Evidence”