“I woke at 1:25 am, this was several months ago, maybe now a year or more. When I woke I first looked at the clock because I hate waking up in the middle of the night on a weeknight when I work. Then I caught through a crack in my blinds a very bright light of which I thought was the moon. So I peeked through the blinds and the moon was super bright! Though I was mostly asleep I was compelled to get up and get my phone out of my purse and open my blinds in the middle of the night, which I would usually never do because of the fear of someone there looking in. Where I live it is pitch black on my street with no street lights. But I still got the phone and opened the blinds to take a picture of the moon.

From the time I spotted the “moon” and then turned and walked about three steps and then back, I was surprised to see how much it had moved in the sky, and though I was still half asleep my mind did pick up on that it was moving out of the sky extremely quick. I was able to shoot two pictures before it disappeared behind trees and the horizon. I then went back to bed, though my dog was sitting at my side looking towards my bedroom door shaking. It was odd and noticed. The next day I went to check out the pictures I had taken. In the first, it was an expected picture of what I thought was the moon, blurry from taking it with my phone. The second picture, however, was something else, something I can’t explain. It is the same thing, what I thought was the moon, but clearly, it is not. Has anyone seen anything like this before? The shapes are very interesting. This is posted on my Onstellar page as a post with both pictures.”

Additional Photographs of the Scene

I emailed the witness a few times, she was very responsive, and she was able to provide additional pictures as requested. However, after several unanswered subsequent emails, I did attempt to phone the witness with no further contact.

My analysis is as follows to the best of my ability with the information given.

As the witness stated, she was woken up in the middle of the night to glowing lights outside her window. The witness also stated that it was odd for her to wake up at such a strange hour of the night. When analyzing the images provided by the witness you can clearly see a glowing white object. The images are a big grainy so it is hard to tell. The witness did state that she was zoomed in all the way 10x as her phone allowed her to.

One observation, is a similarity between the “striations” on the second photograph submitted, which coincide with the slats of the drop down blinds, and the vertical ‘string’ in the design of the blinds.   Here is a comparison image illustrating what may account for the pattern: 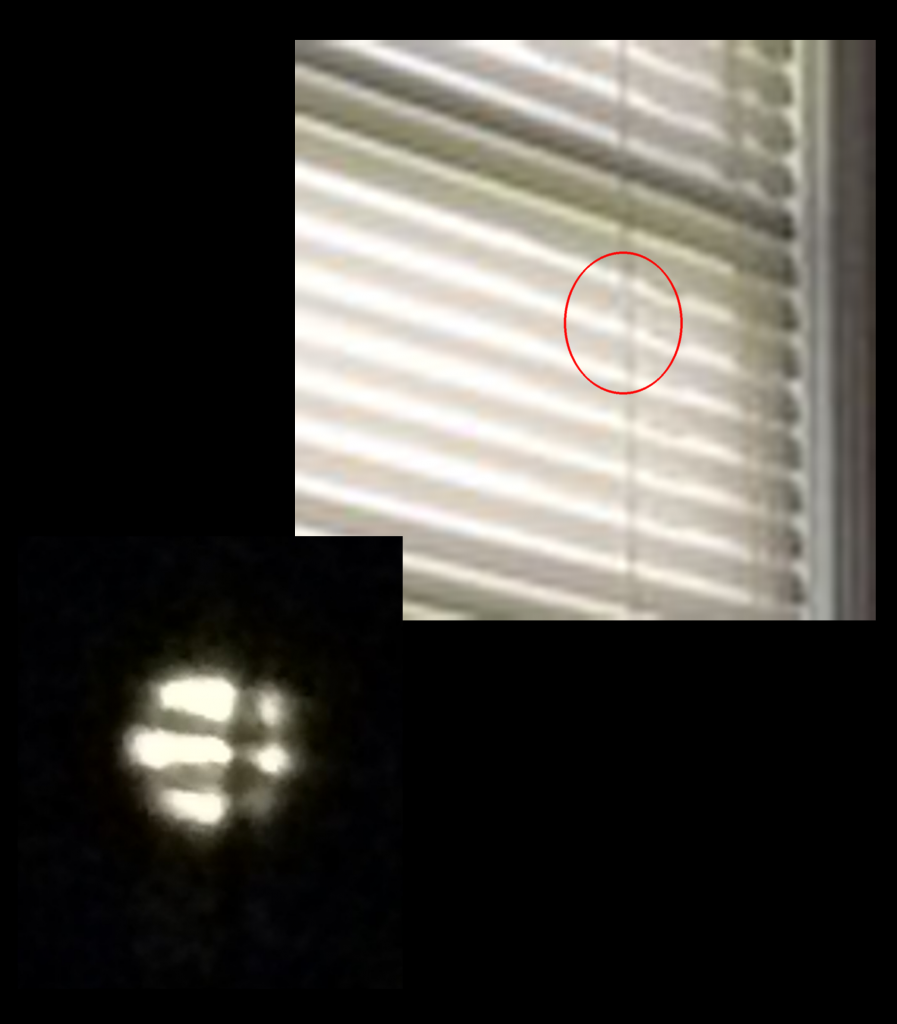 Also when speaking to the witness she stated the object was traveling at a slow speed headed west from what she believes is the south side.

In the images, you can see the object almost split, perhaps not all the way but you can clearly see a divisional pattern. At first glance, I believed this to be the mosquito net that most homes come with in every window. However, I did ask the witness to provide me with some daytime photos of the same window from the outside and the inside. From the images on the outside, you can see that there is nothing that would obstruct the camera in such a way that would create what was in the original images. In addition, the image from the inside it seems that the window this witness took the image from does not have mosquito net. At least not that I can tell from the images.

The data for the images are as follows:

The witness, to the extent of my communication with her, was very credible and cooperative; she seemed to be genuinely interested in what she had captured. She even submitted the images to Onstellar in hopes of getting a clear answer as to what she had captures.

I will not deny the images are great and intriguing yet, they are very grainy and blurry it is truly hard to tell. I will not dismiss the idea of the object she captured to be from out of this world but without further tangible evidence, I would have to classify it as: Undetermined due to insufficient evidence.