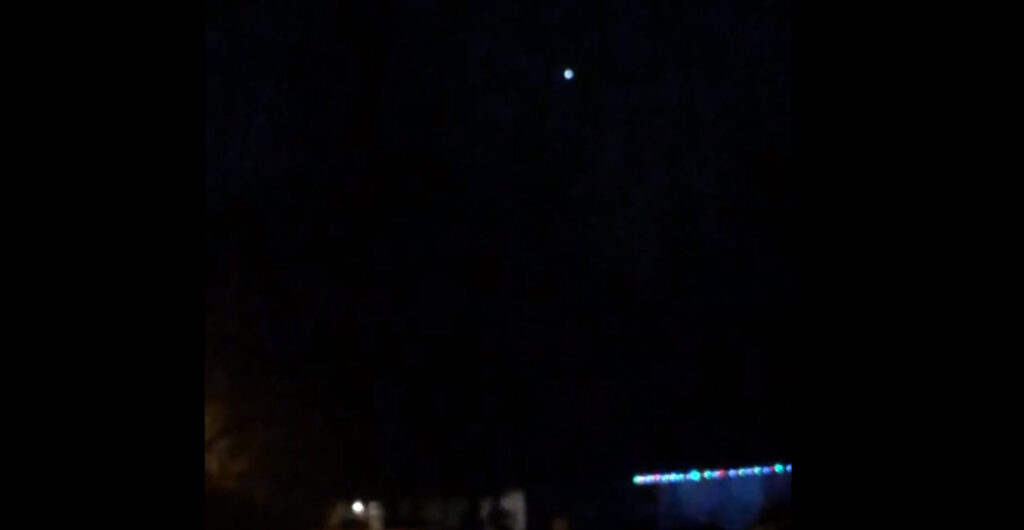 The witness stated in essence on 12/19.2018 at 4:00 am he awoke due to a dream he was having involving aliens. He went downstairs to his kitchen and looked out the window and saw a strange light that appeared to be 5-10 times larger than a star. He went back upstairs then 20 minutes later he decided to go outside, and the object was still in the sky. With his phone, he took video of the object. The witness stated the object was located approx 20-30 degrees above the horizon in the SW at a 110-degree compass reading. At arm’s length, the object was the approx width or slightly less than his pinky finger. The color of the object was bluish similar to the color of the North Star, Polaris. The witness further stated on following nights he did not observe the object.

Searching the archives of Stellarium, (a planetarium software that shows exactly what you see when you look up at night time and day time sky), I was able to view exactly what celestial objects were visible to the witness in his sky from his location in Fresno, Ca on 12/19/2018 at 4:30 am. https://stellarium.org/ 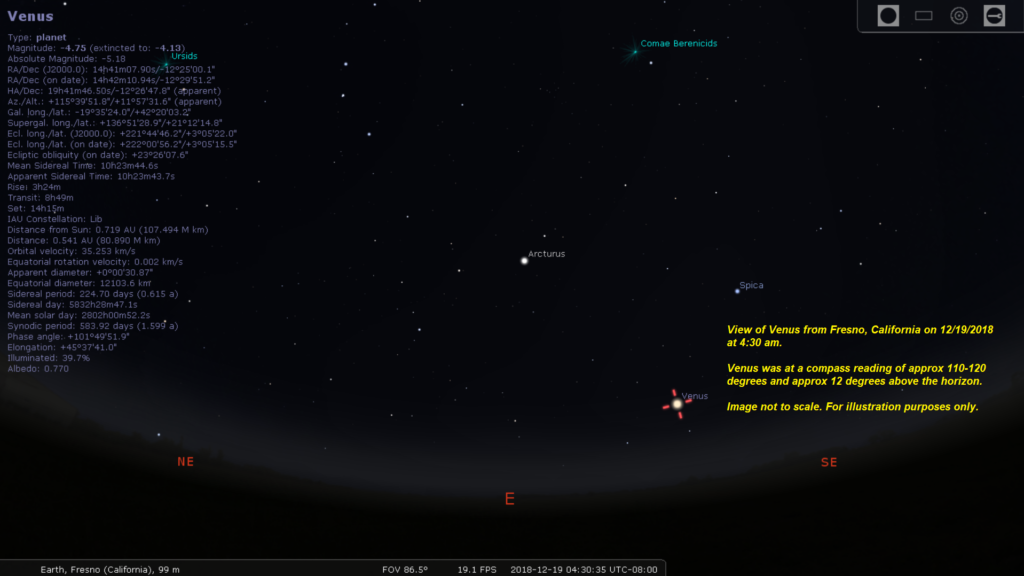 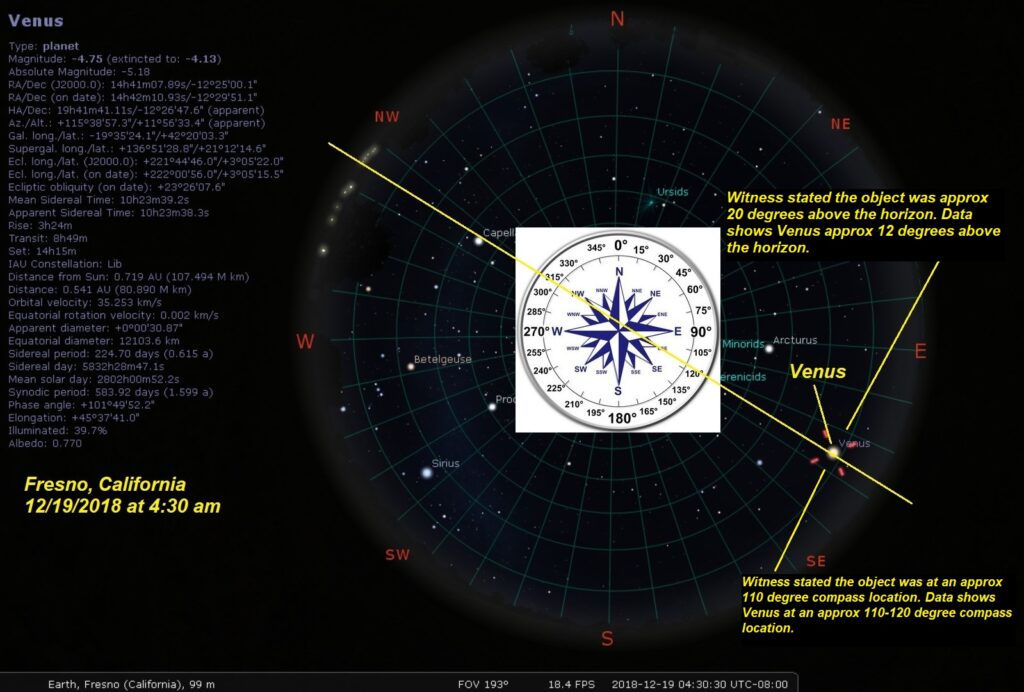 Two images of the night sky visible to the witness on December 19, 2018, at 4:30 am. (Images are not to scale and for illustration purposes only).

The Planet Venus is the second brightest celestial object in our night sky only surpasses by earth’s moon. While not a star, it is often referred to as the “morning star” and “evening star.” When its orbit overtakes earth’s orbit, it goes from being visible at sunrise to being visible at sunset. Because of Venus’s location between the earth and the sun along with both having different orbit times around the sun, we can see Venus’s phases just like we see the moon’s phases. When it is furthest away from earth behind the sun, we see it’s phase as being full. As it’s orbit approaches and goes past earth, it goes through the phases of, gibbous, waning, crescent and half full. Even when Venus is closest to earth and appears as a crescent, it is still the second brightest object in the night sky.

The Phases of Venus by Faithful Science YouTube Channel

Summary and Analysis of Witness’ Statement and Video Evidence

I spoke to the witness on two separate occasions along with his recorded telephone interview. I found the witness to be credible, honest with above average intelligence.

The witness described the location of the object at an approx 110-degree compass reading approx 20-30 degrees above the horizon. The witness measured Venus’s location using a compass. The witness stated the object was extremely bright, bluish/white and almost the diameter of the width of his pinky finger at arm’s length. The witness stated, while videoing, the object shape-shifted. Upon analyzing the video, I observed the object go in and out of focus caused by the cell phone camera attempting to track and focus on the object. Focus issues along with a hand-held cell phone camera are what caused the shape-shifting, movement, and the size of the object to pulsate as the camera attempted to focus. According to the data obtained from Stellarium, Venus was located at an approx 110-120 degree compass reading and approx 12 degrees above the horizon. The data from Stellarium and the testimony of the witness places Venus in the approx location that the witness stated. My investigation brings me to the conclusion that the object the witness observed and videoed was the planet, Venus.

As an amateur astronomer, photographer and videographer I have spent many years observing celestial objects in the night sky. I have experience with astrophotography along with coupling DSLR camera and video cameras to telescopes using eyepiece projection to film celestial objects. Based on my database of planets, stars, and other celestial objects, I can recognize photos and video of these objects. I have also observed, photographed and videoed the planet Venus and familiar with its phases and locations in the sky throughout the year. Venus is also in the top seven objects misidentified as a UFO.

Based on my experience, data from Stellarium, witness’ video and statement along with my video analysis, the object the witness observed was the planet, Venus.