The witness only submitted the following description in their report:

“White orb flying around then disappears”

The video was run through Adobe Premiere, wherein I checked for verification of a solid, real object in inverted mode, and with levels and contrast adjustments.

The object can be seen coming across the sky, touching the edge of the Flying J sign, and then reappearing moments later on the other side.

The witness was contacted, but no further reply was received. There is a regional airport in the exact direction of the sighting, however, no flight records could be cross reference at the time of this report.  The map of this location, with the approximate witness location, is marked: 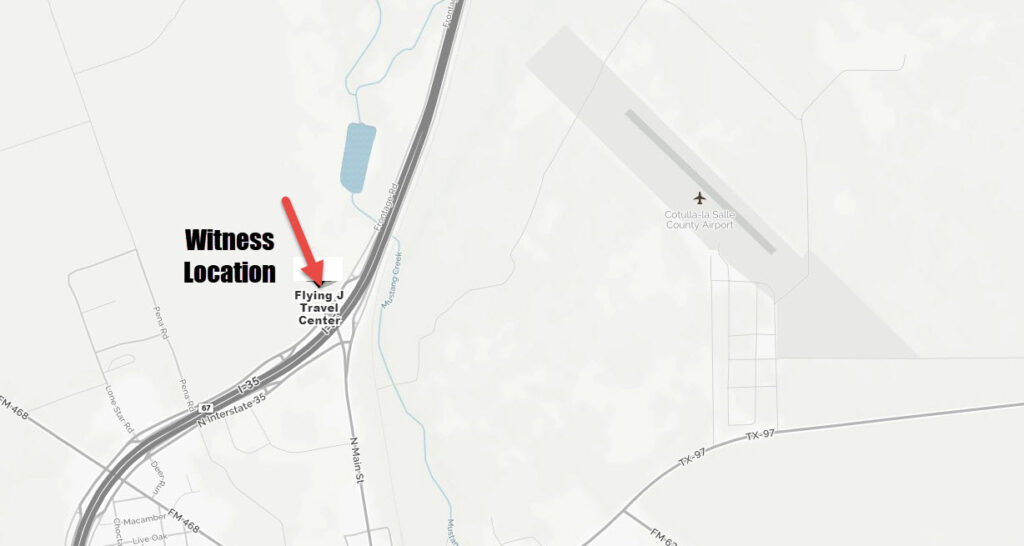 I matched the Google Street View location, where the witness was approximately standing:

The same directional orientation is maintained with the following image, displaying the location of the nearby airport. Although the object does not appear from be going to the airport, it could be an indicator of the source of where this craft came from, or will eventually end up.

It is also possible that the object is a satellite, however, an EXACT match was not possible to match up, since the witness supplied very little information.

The object goes in and out of focus several times, and seems to disappear at the end of the video after going well out of focus by the camera.

One concern is that the object seems to disappear all at once, rather than by degrees, before it goes behind the gas station sign.  This could be due to a frame rate issue of the cell phone camera or compression artifact when the video was exported, and the frames indicating the gradual disappearance behind the sign were dropped, therefore displaying as an immediate disappearance rather than a gradual one.

The sighting is most likely air traffic, with the aircraft going out of focus or behind clouds at the end of the video. Without more testimony from the eyewitness the case must remain unknown. The aircraft shows no other signs of aberrant behavior while it is observed.