By John Greenewald on September 5, 2018 0 Comments

This case was submitted to The Black Vault / TBV Investigations on 06/11/2018 4:26 am. It was assigned to investigator Paul Wright for analysis.

“On the night of May 30th, 2018, I was driving home from the gym with my wife and we saw a bright light in the sky that initially we thought was the moon. It was really far away and very high in the sky. We then saw the object coming closer at a fast rate of speed and was rapidly descending. It was big and definitely was not a plane. The size, speed, and flight path of the object also made it highly unlikely to be a drone. It was big and was really fast. We then realized it was not the moon. It had three very bright flashing lights. my wife got out her phone and tried to record it. As she started to record, it disappeared and went dark. A few seconds later it reappeared and that is where our video picks up. It changed flight patterns a few times and then sped off behind us and out of sight. There was a car behind us, so I was unable to turn around and follow it. The lights were very bright and it seemed to hover a few times before it sped off. Please reach out to me if you have any questions.”

The following video was submitted by the witness for analysis:

I will attempt to identify what the witnesses observed based on the following facts along with witness statements. (including video) I created a visual representation based on the witness’ testimony.

Note: *Witness has not responded to emails to clarify any details or errors etc with the image* 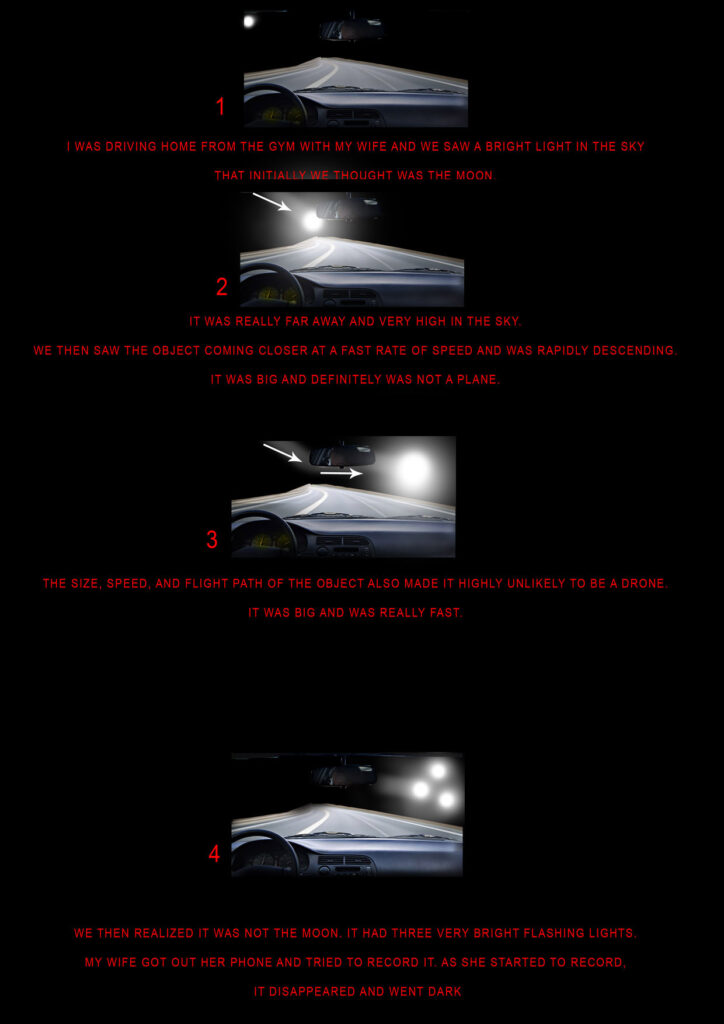 Based on the video evidence it is difficult to make a clear assesment on what the lights are.

My first approach was to scan the metadata contained within the video which contradicts the date and time of the sighting.  Perhaps the cell phone was incorrectly setup or time zone related, but it is something that needs to be pointed out.

1) The footage provided makes it difficult to ascertain direction, height, speed or reference for scale.

2) I researched the local area around route 355 and discovered a number of gyms as the witness mentioned they were returning from one (but which one?) I have indicated on the map route 355 which the witnessed traveled along but its unknown at which position along route 355 the witness was.

3) I researched the local area around route 355 and discovered a number of airports and have indicated on the map route 355 in relation to surrounding airports.

4) The 3 lights visible in the video appear to resemble taxi or landing lights possibly from Boeing 7777 or aircraft that have that particular configuration. Original image sourced from metabunk.org on this similar topic of light clusters.

Researching Stellarium for known celestial objects on 30-05-2018 @ 22:00 revealed multiple celestial objects in the sky, however it would be difficult to speculate what was visible by eye at that time due to the weather and other atmospheric conditions during the sighting.

Based on the witness description (as of this report 28/08/2018) and video, without further sufficient evidence or details prior to the video I am unable to make a solid conclusion, but believe this is most likely a commercial aircraft on approach or take off from nearby airports.

Flight Radar historical data could be used to research flights along route 355, but without the location of the witness during the sighting no further progress can be made.