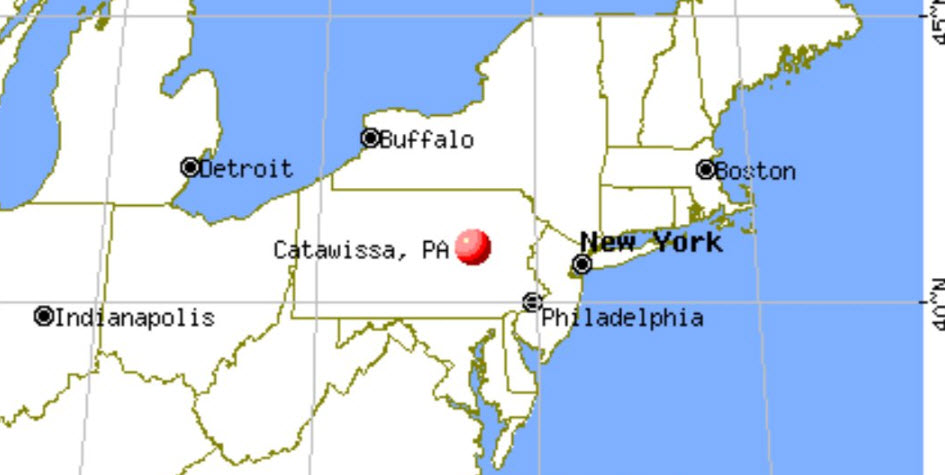 Note: this is the only statement from the witness. The witness never replied to the questions I sent by email.

“Clouds moving really soft from early morning 4:30 am. Saw several clouds moving in like a docking station before being released to move with the wind. Also saw several other types of strange things. I have been here for 3 weeks and see something almost everyday. All photos are from the same morning”.

The witness provided 4-photos numbered 1-4 below.

Searching the archives of Stellarium (a planetarium software that shows exactly what you see when you look up at night and day time sky), I was able to view exactly what celestial objects were visible to the witness in his sky from their location.

The city of Scranton, PA, was the closest Stellarium view to the city of Catawissa. The image correlates to the weather report for Catawissa, indicating clear skies.

Unfortunately, the witness did not respond to my questions sent by email. Based on the weather and Stallerium views for 06/09/2019 at 6:30 am, the sky was clear with no cloud cover. The actual weather for this day is a contradiction to the witness’ photo evidence. It is possible the witness made a mistake regarding the date of this sighting. My analysis is based on the photos and inscription edited into photos 2-4.

I analyzed this photo by enlarging, changing the lighting and contrast, and observed a typical cloudy day with no anomalies.

I analyzed this photo by enlarging, changing the lighting and contrast, and observed a typical cloudy day with no anomalies. The triangle the witness observed was a normal cloud formation. Many people believe triangular-shaped clouds are cloaked UFOs. Since 2011, I have investigated the subject of cloaked cloud craft. While cloaked UFOs are a possibility, photo #2 does not meet the criteria for such an anomaly. It is merely a triangular-shaped cloud formed due to wind current.

I analyzed this photo by enlarging, changing the lighting and contrast, and observed a typical cloudy day with no anomalies. The disk in the cloud the witness is referring to in all likelihood was a Hole-Punch or Canal Cloud. This type of cloud is formed when aircraft pass through altocumulus clouds that are rich with supercooled water droplets.

I analyzed this photo by enlarging, changing the lighting and contrast, and observed a typical cloudy day with no anomalies.

My conclusion is based on the witness’ brief statement along with photos submitted referring to a triangle and disk seen in the clouds. These are very common misidentified UFOs and depicted in countless YouTube videos and across the internet.

Apophenia: the tendency to perceive a connection or meaningful pattern between unrelated or random things (such as objects or ideas). The human tendency to see connections and patterns that are not really there—gives rise to conspiracy theories.

The following researchers both investigated anomalies in the sky and clouds. Their work was instrumental in today’s beliefs and research of cloaked cloud craft and what is termed Sky Critters.

UFOs in the Clouds