I was driving west in Avon Ohio. Between 10:00pm and 12:00am on a night on a late summer night. The year was 2018. The info is not exact simply because at the time I did not want to risk men in Black encounters for nothing so I forgot when and what time. At the moment I was looking at the moon while driving. Then a white light seemed to have come from behind the left side of the moon. It resembled a star. It came from about it’s ten o’clock. If I remember correctly it seemed to sling shot and move east. After I parked in the Walmart parking lot it seemed to be going obviously east and then it turned to move South. When it turned south it had red light. The lights I remember where white and also red but I could only see a light . Not any kind of shape the craft was in. It was flying high and slow. To high to be a helicopter such as life flight . To odd to be airlines. Not near a army base. to travel to this parking lot while traveling west on detroit you have to turn right onto a street that may be state route 83 to go north. then you turn right onto the street that should be Chester. The airspace is the western Cleveland suburbs. No authorities where called and I didn’t have a bad feeling. It seemed to be ten minutes . it’s 11:11 as I write this which to some means synchronicity. Private researchers are welcomed to this vague info. However no pics or videos where taken so at best this is just a story between close friends. There for I thought I may disclose do to lack of interest from big government so not sure why a true man in Black would have interest. My personal name was changed but questions can be sent to the email address. I rather not answer questions any other way unless necessary . In the end my word is my bond.

First order was to establish via Google maps the direction and location of the sighting to eliminate mundane causes. The witness saw the object come from behind the moon. On August 1st 2018 the moon was in its waning gibbous phase, quite bright. The distance to the lunar body is significant and would not make much logical sense to see the object come from behind it, and then suddenly be in the atmosphere of the planet. It’s more likely that the moon light obscured the object until it passed into the background of dark space. The object had red and white lights. Red lights are indicative of a wing light on the left side of most aircraft. This would make sense if the object were moving to the east. White lights are typically runway lights or anti-collision lights. The right wing is usually green lights, but the witness does not state seeing green. Possibly because the object was facing away from the viewer. To the east of the Walmart where the witness paused to see the object is the Cleveland Hopkins International Airport (CLE). On the night in question there would have been 10-20 incoming flights. 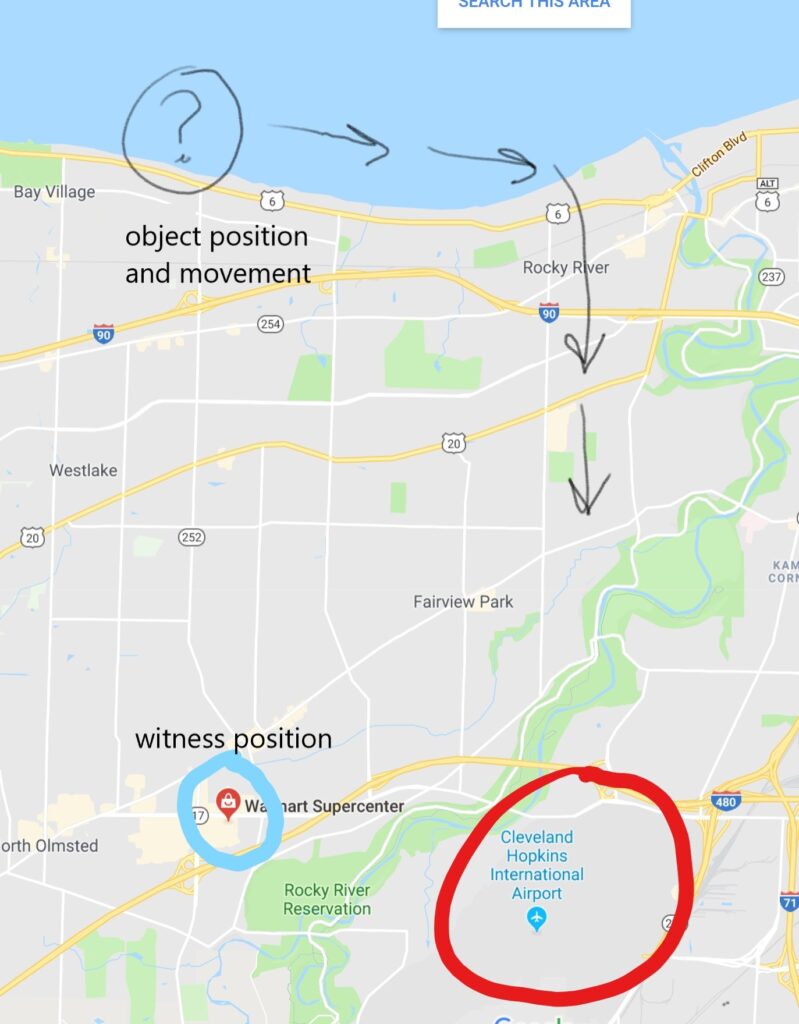 In the screenshot from Google maps I have marked the pertinent details. The most likely explanation is that the witness saw an airplane preparing to land at the nearby airport. Without more substantial information such as video or still images it is impossible to ascertain what the witness saw.