On December 18, 2017, a UFO witness submitted the following (and asked for anonymity) and the date given was approximate:

“Travelling south on 4 lane highway 35mph limit saw a black pyramid shaped object float over tree tops on my left and fly above and in front of my now stopped car. I stopped my car because this was the strangest thing I ever saw up until that time. It stopped in front and above of me. It checked me out(only car on the road) and I checked it out for maybe 10 seconds then it continued on to my right.

It was approx. 75-100 feet in air no sound and I saw no body structure. It had a colored light in top point of pyramid and bottom 2 points. Don’t remember the colors and there could of been lights running up the angled sides of pyramid but I don’t remember. I drew a pix and showed it to private pilot at work the next day who said those aren’t colors on airplanes.

I followed it turning right down a narrow tractor road. It was heading towards a golf course. I got scared, turned around and got out of there. This occurred sometime in the late 1970’s to early 1980’s. Sometime later watching Unsolved Mysteries about Bentwaters case and thought to myself did I witness one of the Bentwaters craft.”

Due to the passage of time, and lack of photographic or video evidence, a case like this is difficult to pinpoint.

A database check on the National UFO Reporting Center database, revealed the following cases that fit the approximate time frame, and the location.

The witness was sent these cases, and their response was the following:

“Hi. The reports are all around the right time frame. What time of year I don’t remember. Wordens Pond would of been the direction the object I saw could of been headed to being maybe 15 miles away and in the right direction. Oddly enough I had a friend during that time frame whose family had or has a cabin on that pond. Been there a few times. I know about the TR3B and Phoenix chevron type of craft. The object I saw was not large and it flew in a vertical plane not horizontal.”

When asked for reference images, the witness did supply the following photographs, which they felt, was close to what they witnessed. According to the witness:

“I did a picture search for the first time and came up with these two pictures that closely resemble what I saw. Now, you have to imagine them up against a black sky, 75-100 ft in front and above you. You wouldn’t see any structure. Just the lights giving you an idea of the shape which I call pyramid as opposed to triangle.” 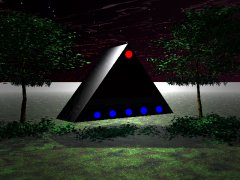 Please note: These images may be copyrighted, but no source was found. They are used here as reference images only, and are not to be construed as witness drawings, etc.

There is going to be no way to readily identify the object, with the lack of evidence, and the passage of time. However, the case is archived here to hopefully find corresponding cases in the general area around the same time frame.