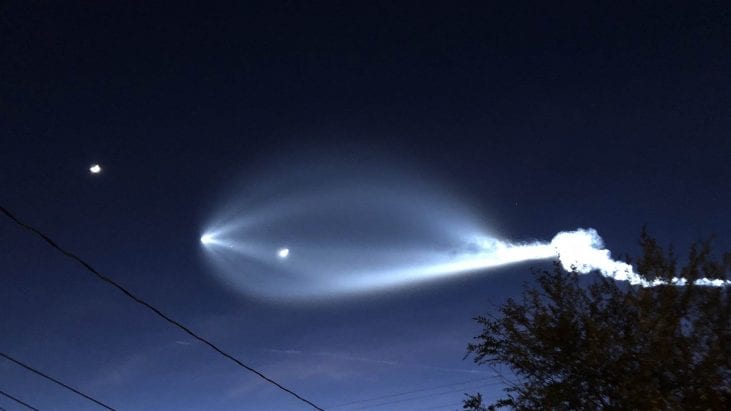 On the night of December 22, 2017, The Black Vault received numerous emails and telephone calls about a mysterious object, or objects, over the greater Los Angeles area.

I live in this area (specifically, Castaic) and witnessed the event first hand.  Having grown up in the San Fernando Valley, I witnessed launches of rockets from Vandenberg Air Force Base numerous times.

The object that created quite a stir was a SpaceX launch of their Iridium 4 Mission, scheduled for this day. According to SpaceX:

SpaceX is targeting launch of Iridium-4 from Space Launch Complex 4E (SLC-4E) at Vandenberg Air Force Base in California. The instantaneous launch window is at 5:27 p.m. PST on Friday, December 22, or 1:27 UTC on Saturday, December 23. A backup launch opportunity is at 5:21 p.m. PST on Saturday, December 23, or 1:21 UTC on Sunday, December 24. This is the fourth set of 10 satellites in a series of 75 total satellites that SpaceX will launch for Iridium’s next generation global satellite constellation, Iridium® NEXT.
Elon Musk even got into the fun, by tweeting some humor, taking a shot at all the theories that were rampant on the internet.

Also to point out, these types of rocket launches have been the culprit in many UFO cases over the years.  For those who don’t see a launch that creates such a dazzling light show – the result is a flood of UFO reports and accusations that aliens are invading.