The following case was submitted to The Black Vault / TBV Investigations on December 29, 2017.

The witness’ brother submitted the following:

“My brother filmed this UFO 12-17 in Detroit, Michigan at night at our uncle’s home, no airports nearby.

The UFO was yellowish in the center, circling around was yellowish in various colors moving like a jelly fish, but as he filmed this thing the circular UFO appeared white, and that field around the object broke up in box form as static, but its plain to see.

It also made a right angle turn, then left before disappearing others witnessed it. I contacted local news fox2 here, no reply.”

The sighting occurred on the 4th, and the case was assigned to TBV Investigations’ researcher Dylan Santiso.

TBV Investigations received the original report from “Mike”, as he did not wish to disclose his identity in full.  After a calling Mike on January 4, 2018, it became apparent that Mike was reporting this case for his Brother, who we will refer to as “Hardy”.

I interviewed Hardy and asked for a better copy of the video that was submitted by his brother, Mike.   After numerous attempts to try to get a better quality and uncompressed version of the video, I was only able to obtain the following:

What I find interesting about the video is the first 3 seconds.  There seems to be two objects, one large and one small.  The small object jets away from the first one and is then out of the frame three seconds into the video.  Following, the object speeds up, then slows done at the 18 second mark, then seems to descend behind trees/buildings. 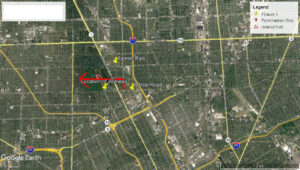 The red arrow follows the path of the object, as reported by the witness.

Harvey noted and answered questions regarding the before, after, and during recording periods:

Noted Airports in the vicinity:

It is important  to note that the witness felt that that this sighting was of “unexplained origin”.

Unknown without better footage.  The video is highly pixelated and of poor quality.   However, the witness seemed honest, genuine, and lucid.