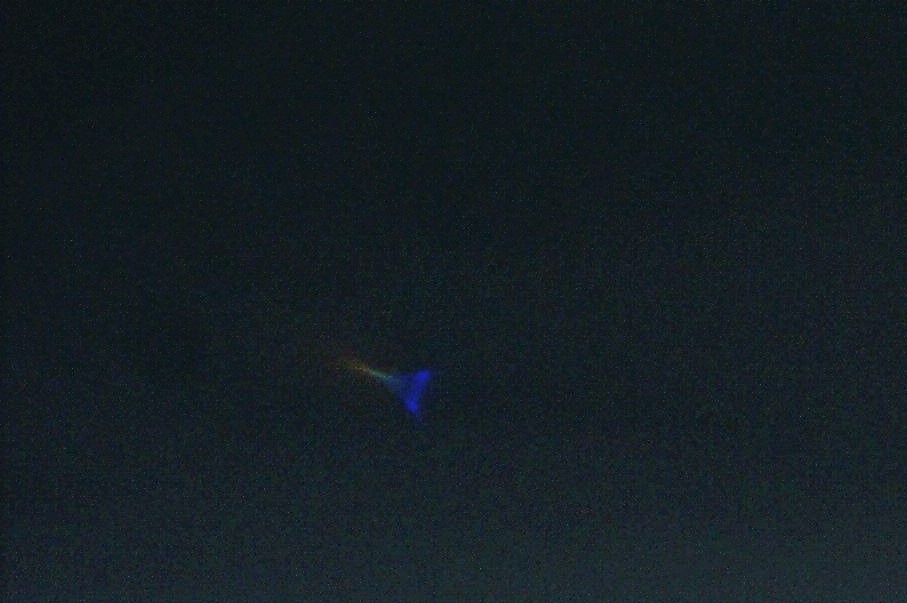 I am ex Navy 15 years, and ex Military Police for 3 years of those 15. I have been shooting photography my entire life. I used a Sony A350. It’s 14 years old or so, but in good working condition. I just bought a Nikon D750 2 days ago. Lord knows how that thing works.

I was shooting a electrical lightning storm.

I didnt see the ship until I got home. I wear glasses and the ship appeared to be a triangle shape vessel. I saw it only in one frame, as the lightning lit it up.

It only appeared to be a ultra violet spot in the clouds. As I cleaned my file up, wow impossible, it was a ship, or the luckiest lens flare as some people are calling it.

I can see a lens flare in bright sunny day,, but how do you project that into a black night into the clouds. It might be the TR3B that people have speculated. Who knows..

It is extremely easy to spot the visual disturbance as soon as you open the picture.

It appears to resemble light refraction or something of a triangular shape. The triangular body has a blue color to it but as it leads on into the nose of the object, we see a almost color scale. There is nothing else in the pictures that is out of the ordinary.

The witness stated that on the 6SEP17 around 2242, he was taking pictures of a thunderstorm out in the Cornerstone Park, located in Henderson, Nevada. Witness was facing south as the storm was approaching, as he began to take his pictures. It wasn’t until later that he discovered the object seen in the pictures. He states that he did not see it while he was out there and that the only reason he was able to capture it was due to the ultraviolet light that the lightning was giving off.

Whenever we have a massive amount of light such as a lightning storm, we should expect over-exposure, lens flares and other light caused issues with cameras.

I put this photograph through a few contrast relievers and did a few tweaks on the coloring to see if I could pull anything out of it, but to no avail.

The object does appear in an odd shape, but I do believe it to be of natural origins, due to the situation, weather, lighting and of course, being taken by a camera lens.