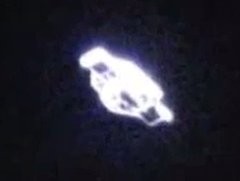 I live in a rural part of Michigan. The closest major city is Port Huron. I saw this object near my home on the night of Oct 27, 2013.

So, I followed it down a public dirt road. Then it turned so I had to turn onto a private unmarked road which is probably used for farm equipment to tend to the adjacent field crop.

At that point, I was running out of road to go any further. So, I got out of vehicle to take a better view of it. Then, suddenly, the object started moving towards me.

It startled me so I ran like hell for a little bit. It was making a very strange low swirling noise… so, please try and turn up your speaker volume to hear it better.

Once I moved a distance back, I zoomed out the camera a bit more and noticed the object was hovering directly over my vehicle. Then it started to lower itself as it slowly rotated directly over my roof!

At that point, it appeared to be shining a very bright green beam over it.

Then suddenly, it shot straight up into the sky and the swirling sound disappeared at the exact time it vanished.

This was a very eerie experience and even my hair was standing on end through the entire time and felt as if there was highly dense static electricity in the air!

What the heck do you think this is people? This thing scared the bejesus out of me!

For the debunkers that come on here and type “FAKE” without doing any in-depth analysis or proof of evidence that it’s a fake just tells me that they’re prejudging the video before even watching it.

Also, if they were sitting in my shoes at that time and experienced what I saw, they wouldn’t be saying ‘fake’ either. The video doesn’t do this sighting justice as the light intensity and the sound that came from the object was intense. Even my hair was standing on end at the time.