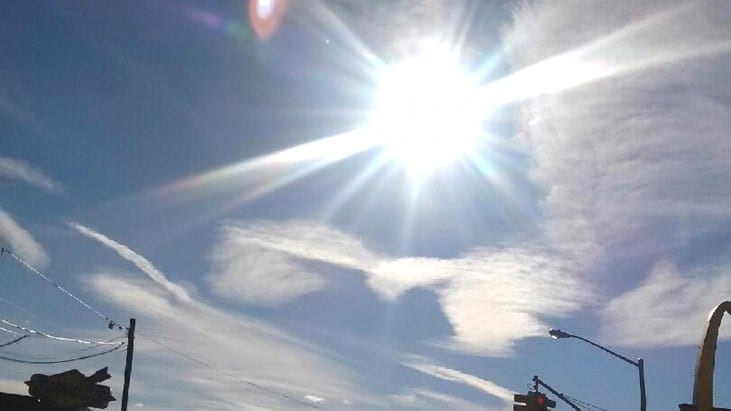 Note from The Black Vault: Usually, a photo like this is very indicative of a lens flare. You have a bright object in the frame (in this case, the sun) which creates reflections inside the camera.  However, this photo is accompanied by multiple witnesses, even calling 911, that saw it with their eyes, and not the use of a lens/camera.

That said, it is possible this photo is something else, tied to this story erroneously, and can be explained as a lens flare. It is possible there is no connection between the photo and what the witnesses saw.

The story is archives here for reference, which was published on April 27, 2015, by the NY Post:

The truth is out there — and it’s hovering over The Bronx.

A mysterious light in the sky so freaked out some Hunts Points residents that they called authorities to report their only possible explanation: the arrival of aliens from outer space.

A “flying spaceship” is moving swiftly over East 149th Street and the Bruckner Expressway, one terrified woman told a 911 operator Saturday night, according to an FDNY source.

Juan Marrero said he, too, had a close encounter.

“I look up and see this fireball, ‘Whoosh!’ and then another, ‘Whoosh!’ ” said Marrero, 57, a pigeon fancier who was on the roof of his building at 11:30 p.m. when he saw two bright lights streaking across the sky. “From one side of the sky to the other, too fast for an airplane.”

Andres Morales, 25, said he also saw the speedy orb — and did his best to document his out-of-this-world experience.

“I stuck my hand out the car window and snapped like crazy,” he told The Post. “I don’t know what it was but it was moving crazy fast.”

It’s not the first time locals have said extraterrestrial immigrants boogied down from another galaxy to check out the neighborhood. Unusual lights in the sky were seen in the same area last year, and also in 2011, according to self-described “UFO journalist” Ryan Sprague.

“I definitely think we’re dealing with anomalies that could potentially be nonhuman,” Sprague said.

East 149th Street is close to La Guardia Airport, which could lead to “misidentifications,” Sprague conceded, though he said witnesses should not be discounted.

Those who saw the orb on Saturday, and the one last May, echoed the same description — a light that “just sort of hovered, stationary, and then shot off in the blink of an eye,” he stressed.

“The maneuvers these objects seem to be making don’t fit with any current technology that we’re aware of,” Sprague said.

“They’re not moving, then darting off at unbelievable speeds,” he explained. “I just don’t think that’s something a human could survive.”

But why The Bronx?

“To study us,” one longtime resident offered. “Maybe they want to learn to break dance.”