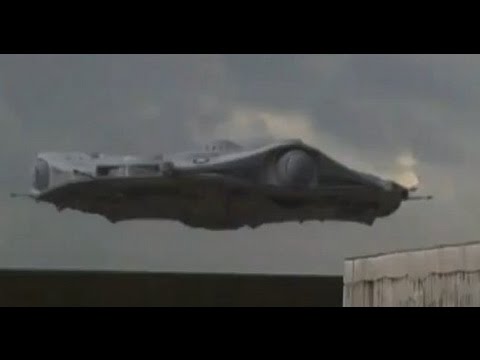 Conspiracy theorists and Star Wars fans, get ready: New film footage is being promoted as a UFO sighting, and it looks like Han Solo could be at the helm.

The saucer-like airborne vehicle, posted on YouTube by the Alien Disclosure Group UK’s Stephen Hannard, appears to follow a spacecraft — or is it a man-made aircraft? — as it travels near the ground, hovers, and disappears behind a building.

“Possible leaked footage of a UFO arriving then landing at an unknown location in New Mexico,” Hannard wrote. “Could be one of ours, CGI, or could be the real deal. As Always You Decide.”

Some YouTube commenters aren’t convinced that the footage is from new Mexico, let alone alien-assisted.

“Ok, first, a UFO would never go back to New Mexico,” one wrote. “I … uh … I mean THEY made that mistake back in 1947. Finally, that spaceship does NOT belong to Bob the Martian. Not that I would know if Bob the Martian exists, but IF HE DID, then I was not … I mean HE was not flying that ship last night and he does not own it. So, to recap, that is not my ship –I mean Bob’s ship! That’s not Bob’s ship and he was not flying under the influence … I DIDN’T MEAN TO FLY THAT LOW!!! I WAS DRUNK, OKAY?”

Some commenters have noticed that for five seconds, near the end of the video, an emblem in the shape of a five-pointed star appears on the exterior of the UFO. But at least one offered a plausible — or at least entertaining — explanation.

“They always have a flasher light on the tail like that so that no other UFOs will rear-end them,” the viewer wrote. “They put that US military decal on it to be inconspicuous. ‘Hey, just a normal US Air Force jump ship, folks, nothing to see here.’ That’s what they want you to think. Good thing it was a Sunday and nobody was working in any of those buildings, except Joe the cleaner, and nobody ever believes him when he says a giant UFO landed outside and that’s why he didn’t have time to clean that toilet.”

The video has been viewed more than 1.6 million times since Feb. 20. And YouTube surfers seem to be having fun with it.