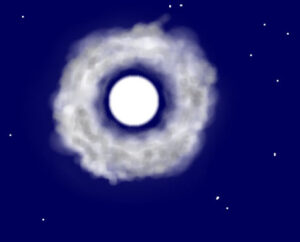 Description (In Witness’s Own Words):  Me and my friend saw what we thought was a full moon with a thick dense ring of smoke around the moon, as we watched the ring was pulsing and getting bigger it was like something was in it. We thought it was getting bigger than realized it was coming down we were engulfed in this fog that seemed to be alive then I snapped out of this daze starring back at the moon this all lasted about 5 to 10 min. I thought that my friend told me the time and I was blown away! 2 and a half hours were gone. Please email me of what we witnessed please.

Second Witness Report (In Response to My Questions): Hi, thanks for replying it was the 2nd week of October, 2004. The sky was clear with a  5 to 10mph breeze.  Yes, my best friend also witnessed it. I reported it to 3 or 4 different sites on the Internet but got no response. You  are the first to respond. It happened in town and the weird thing is my friend said when he walked out side his fence to garage the whole thing disappeared, but when he came back inside the fence it was there again. His girl friend was awaken by hearing us screaming and yelling, which I don’t remember us doing then she said she just went back to sleep. Normally she would have been right up. After I snapped out of this daze I went right inside my buddy said he fell down disoriented. I felt motion sick and had a headache for about 3 weeks.We talked about getting hypnotized but were chicken I guess. I hope this helps please let me know if any thing like this has ever been sighted.  Thank you it means a lot.

Investigator’s Notes: The witness has been very responsive to my inquiries.  He asked me about hypnosis.  Given that fact I am doubtful that this case is a hoax.  It certainly is a strange case and involves missing time as well as temporary physical effects.  I have no explanation for what the witnesses encountered.