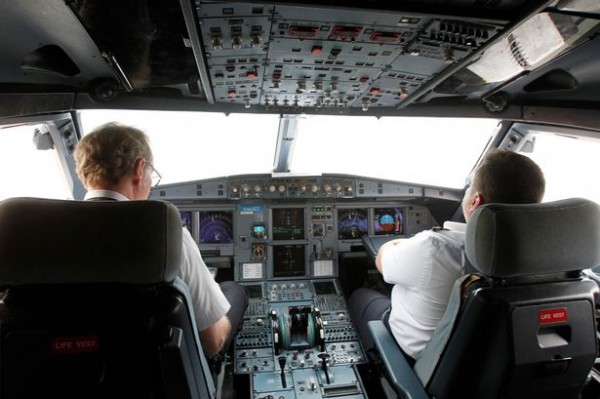 A terrified airline pilot ducked to avoid a UFO he feared was going to smash into his plane at 34,000ft.

The captain of the packed Airbus A320 spotted the silver object heading straight for the cockpit as his plane flew above Berkshire.

He was looking out of the left window a split second before the bizarre incident.

A safety report said: “As he turned to look ahead, he perceived an object travelling towards them at what appeared to be the same level, slightly above the flight deck windscreen.

“Having very little time to focus, he was under the apprehension that they were on a collision course with no time to react.

“His immediate reaction was to duck to the right and reach over to alert the first officer; there was no time to talk to alert him.”

The stunned captain blurted out: “Did you see that?”

But his bemused deputy had not seen the UFO and replied: “See what?”

The pilot’s behaviour made him fear there was a fault with their plane.

“The first officer turned and looked at him thinking some was wrong with the aircraft,” the report revealed.

The captain was so spooked by the incident in July that he reported the sighting to safety watchdogs at the UK Airprox Board , which investigates near-misses in British airspace.

He told experts he saw a flying object shaped like a cigar or rugby ball, which was “bright silver, metallic”.

The “near-miss” happened 20 miles west of Heathrow Airport, according to a report published last week.

An official probe said: “The pilot was subjected to a powerful impression of immediate danger caused by his perception of an object closing rapidly on his aircraft.”

But investigators, who did not reveal which airline was involved, failed to find any unidentified aircraft in the area at the time.

They added: “It wasn’t possible to trace the object or determine the likely cause of the sighting.”