The following report was created by Christopher Connelly of TBV Investigations.  It can not be reproduced in any way, without prior permission.  The photographs are copyrighted to their respective owners. They are used here under fair use, as they were posted publicly on Reddit, Imgur, etc. 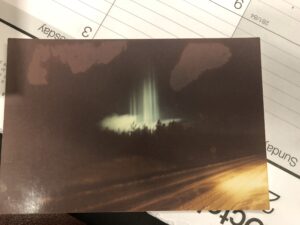 On 12/1/17, I came across a post on Reddit that that caught my eye.  The author of the post (Machinegamer), wrote the following describing what we are looking at:

“Was having a drink with my boss in his office today. I’m a conspiracy theorist and he picks at me from time to time regarding some of the stuff I share with him. So he goes “did I ever tell you my ufo story?”

I was like hahahahaha ok thanks for making fun of me, his face got serious and he goes “listen to this story…”

So he said “20 or so years ago I was driving in northern Michigan near glen harbor (sic) at 2:30am in the middle of nowhere and all of a sudden my entire car lit up”.

He described this insane light and shrieking noise that hurt his ears… and he’s going on and on and im waiting for him to laugh and be all like gotcha!!

He had been taking pictures of northern Michigan cuz photography is his hobby, so he had a camera on the passenger seat of his car.

He said he got out and this craft was hovering over him for what seemed like a very long time, he was afraid. Then he remembers he had his camera, so he took it out and said he took pictures.

Still I’m waiting for him to laugh. I gave him a “ya ok” look…then he rolled his chair over to his file cabinet and started rustling around folders…

See the photos attached to this post…the hairs stood up on the back of my neck and my arms. My jaw dropped.” 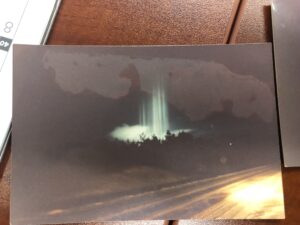 The original pictures appear to come from an older model camera and the film was developed to what you see here. The only images available for investigation, was a photograph of the photographs, which is not ideal for analysis.

The pictures appear to have been taken at night, and there appears to be snow on the ground, leaning towards a low temperature.

It’s almost impossible to tell if there is any cloud coverage or any other meteorological formations. The ground is heavily illuminated, creating an almost complete coverage of the area. Light formations resembling pillars are seen rising from the middle of the illuminated area. The light has an almost blue color to it. It appears there are no other vehicles, personnel or animals in the picture.

There appears to be a sign to the lower right hand side of the photo, on the opposite side of the road, which may mean that these is a side road leading to this area or near it. The light appears behind the treeline but I cannot judge its distance from the witness.

When I encountered these photographs, they were posted by an anonymous user of the website Reddit. This user was the coworker of the actual witness, so all details are coming from him/her. The actual encounter took place 20 years ago, date unknown.

Per the co-worker: Witness was located outside of Glen Arbor, which is located in Northern Michigan. This area is known to be rural and a well known area that is the victim of hydraulic fracturing. The approx. time was 0230 when the witness was traveling down a snow covered road when his surroundings and his car began to light up. The witness then got out of his car to see a craft overhead. The witness described the craft as making no movement but sounding like a “Banshee.” No further information has been given.

There is no craft visible in the picture, but I can tell that there is a valley where the lights are coming from and upon further inspection, the lights do appear to be hitting some sort of low lying fog or small cloud formation. I believe that this may be a city, construction site or a fracking site. The lights resemble the amount of light that a small town or site would have.

The pillars may be explained by ice crystals, or “light pillars” which are defined as the following:

“A light pillar is an atmospheric optical phenomenon in the form of a vertical band of light which appears to extend above and/or below a light source. The effect is created by the reflection of light from numerous tiny ice crystals suspended in the atmosphere or clouds. The light can come from the Sun (usually when it is near or even below the horizon) in which case the phenomenon is called a sun pillar or solar pillar. It can also come from the Moon or from terrestrial sources such as streetlights.”

Based on the assumed temperature, forming in the air and the light reflecting off of such, this could be a viable explanation. With the witness being near the lake, I’d say that the temperature could easily be in the 20’s.

This “light pillar” phenomena is quite common in colder climates, such as Canada and Michigan where these photographs were taken.

I have attempted many times to contact the witness, but have received no response.

Due to this fact, it is difficult to put the story together, as it lacks many details and due to it being 20 years ago, human memory tends to fill in a lot of the gaps.