By John Greenewald on September 7, 2018 0 Comments

This case was acquired from media coverage from Charlotte Observer article by  The Black Vault / TBV Investigations on 06/09/2018. It was assigned to investigator Paul Wright for analysis.

Interview article sourced from Charlotte Observer Sept 03, 2018 09:33 AM. The following is an excerpt from the article:

Another alleged UFO sighting near Charlotte has appeared on Facebook and in this case, it was posted by a husband and father who says he doesn’t necessarily believe in UFOs.

Javion Hill, 35, of Kings Mountain, North Carolina, says he took several photos of the object during a storm on the night of Aug. 18, as he drove on U.S. 74 southwest of Charlotte.

The images feature something square hovering above the treeline, with its edges fringed in lights. Hill told the Charlotte Observer the craft frightened him to the point that he didn’t sleep that night.

“I was on my way home with my wife on the speaker phone, and it looked like there was a tornado coming, so I was trying to take a picture of the clouds for my wife,” says Hill.

“But then I saw something that wasn’t normal and I was, like: ‘Oh my god, what is that?’ I started trying to take as many pictures of it as possible while I was driving.”

Hill says he pulled over at the next exit to try and get video, but the aircraft had vanished. A heavy rain followed instantly, he said.

Hill says what he saw is actually bigger than what is seen in the photo.

“ was worried for my safety,” he said. “I didn’t believe in UFOs until that moment.”

The following 2 photographs below were submitted to the media by the witness and used for analysis: 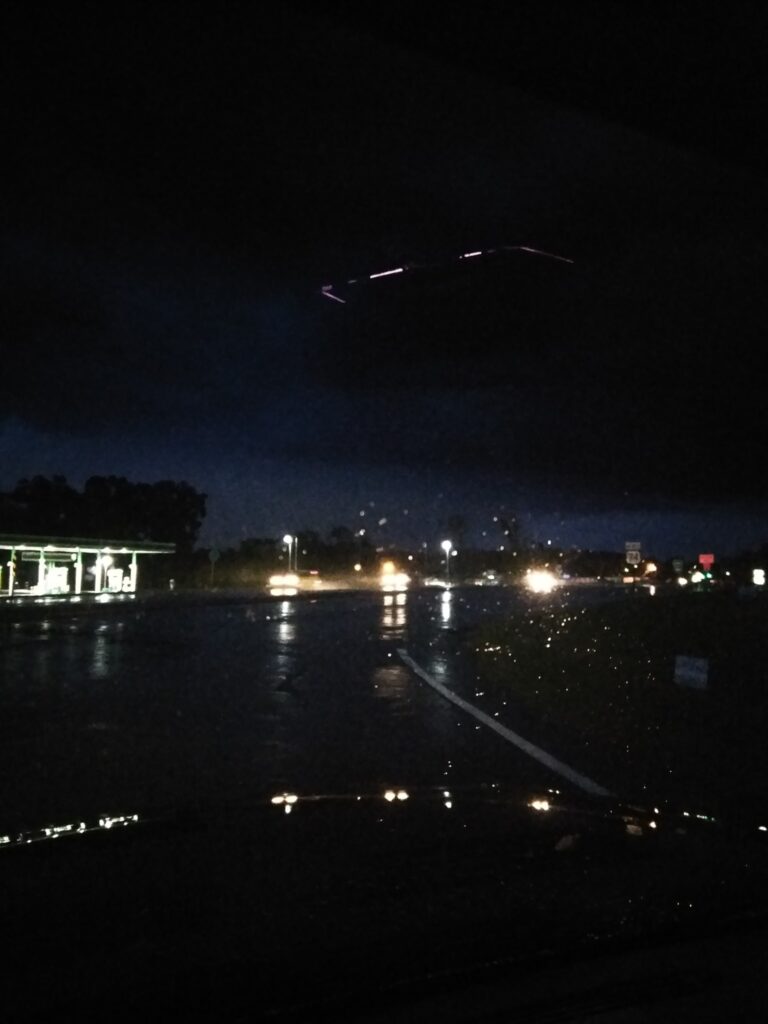 I will attempt to identify what the witnesses observed based on the following facts along with witness statements. (including photos x 2 sourced from the Charlotte Observer and Daily Mail)

The second original photograph has been enlarged. Next to that on the right hand side is a tweaked version of the original second photograph. The levels and contrast have been tweaked.

My first approach was to zoom / enlarge the 2 photographs and tweak the levels and contrast. It became obvious that the “UFO” was in fact a reflection.

The clouds and sky were visible through the reflections in both photographs.

The next challenge was to work out what the reflection was.

John Greenewald determined that the “light reflection” was possibly from a self illuminating phone case, which after researching the different types of illuminating cases very quickly became the most plausible assumption.

Image below of illuminating phone cases.

I researched the local area around  U.S. 74 southwest of Charlotte just to get an idea of location, see Google map below.

Stellerium image for celestial objects on 18/08/2018 approximate position based on “U.S. 74 southwest of Charlotte”

Based on the witness report and the 2 photographs it is extremely likely that the UFO is in fact a reflection of a self illuminating cell phone case.

The case could have been on the dashboard or somewhere else inside the car to create the reflection.