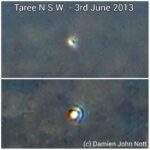 The following case was submitted to The Black Vault:

I just wanted to share this sighting from Taree N.S.W. that was captured back on the 3rd of June 2013 from a lookout called Breakneck.

This object came down from the sky as a metallic sphere with a glow around it in front of two of us. The sphere seemed to open up like a seed and reveal an extremely bright glowing orange center.

These two photos were taken with a Canon Powershot 18.1 mp camera as we were moving to a better vantage point.

The object was a little shy as it promptly flew straight back up into the sky and disappeared into an unusual looking domed cloud. The shot taken before these shows a small dark circular mass in the same cloud. This was a fascinating capture for me as it was the first time I had ever witnessed a metallic sphere or orb open up and reveal what it did.

The entire sighting lasted probably 20 to 30 seconds from when it was first spotted in the cloud to when it disappeared back into the sky. The object was completely silent though there was a strange feeling involved that it was watching what we were doing .