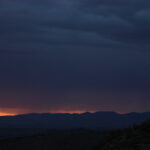 I was sitting on my property in the Aquarius Mountains south of Interstate 40 at 42 hundred ft. elevation trying to capture lightning in the distance at dusk.

Using a three second shutter speed with the lens fully zoomed out and pausing about two seconds between shots I took a series of seven pictures each with the mysterious lights in them.

The camera was on a tripod and was never repositioned for the entire series.

The lights had to have been blinking for there not to be a trail using a three second exposure. The lights were not observed while taking the pictures; only after loading them on my computer.

There is a pattern to the lights across the seven pictures. Zooming in on the lights on my computer they appear rectangular.