Thursday, April 2
Trending
You are at:Home»UFOs»Retired Moline officer recalls the day the UFO paid a call 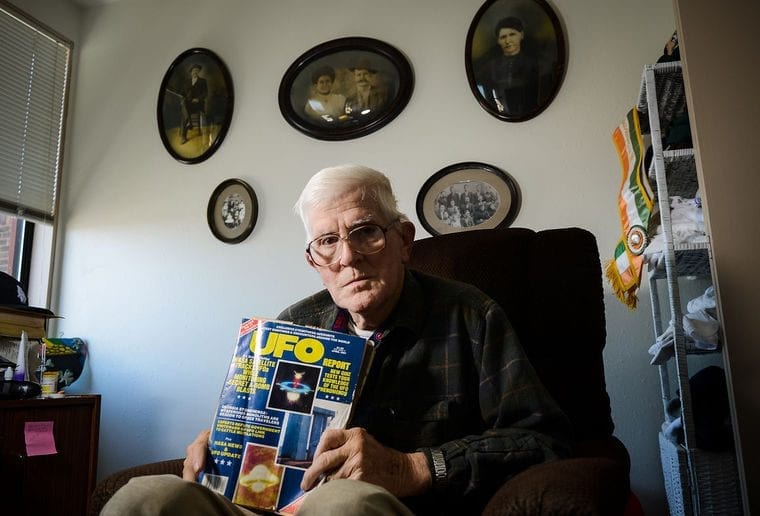 Retired Moline police officer Bill Fisher holds a memento from his UFO sighting in 1967, in Moline. On March 9 Mr. Fisher used his 8mm movie camera to film an 'object' in the sky.
UFOs

By Administrator on March 24, 2015 0 Comments
Retired Moline police officer Bill Fisher holds a memento from his UFO sighting in 1967, in Moline. On March 9 Mr. Fisher used his 8mm movie camera to film an 'object' in the sky.

“It came out of the sky, landed just a little south of Moline.

Jody fell out of his tractor, couldn’t believe what he seen.”

—  Creedence Clearwater Revival, “It Came Out of the Sky”

Bill Fisher still vividly remembers the strange, bright, silvery object that appeared to be hovering over the Mississippi River on the afternoon of March 9, 1967.

Mr. Fisher, then a Moline police officer, had just parked his three-wheel patrol motorcycle on 16th Avenue across from Sacred Heart School, where his son William Jr. was a student. Others saw the object, too, including neighbors, several students and a couple of nuns. Mr. Fisher retrieved an 8mm movie camera from his police trike and got some footage. It had moved away by then, and what’s caught on film is a little indistinct.

But those two minutes of footage helped make Mr. Fisher a star witness in a U.S. Air Force investigation of several UFO sightings reported from Moline to Galesburg over a few days in March 1967. Two investigating USAF captains arrived the very next day.

“So that gave them a little perspective. From where I was standing, looking that way (north), I thought it had been over the Arsenal. Of course, I was naturally suspicious — somebody spying on our government.”

In an unusual episode in a very well respected 30-year career as one of Moline’s Finest, Mr. Fisher also soon found himself sought out by a variety of UFO-ologists, from prominent Northwestern University astronomer J. Allen Hynek to a mysterious trio dressed in black who confronted him at the police station. He and his film were written up in UFO magazines and supermarket tabloids. Mr. Fisher also was interviewed for a 1972 book co-edited by astronomer Carl Sagan called “UFOs: A Scientific Debate.”

Last Tuesday Mr. Fisher celebrated his 80th birthday with a surprise party at the East End Bolders Club in Moline, including a bagpipe serenade for the former grand marshal of the St. Patrick Society Grand Parade.

Other police officers saw it, too

Mr. Fisher wasn’t the only law enforcement officer who saw an unidentified flying object over a period of a few days in 1967. In separate incidents, sheriff’s deputies from Knox and Henry counties also reported seeing strange and vivid objects in the sky, a couple of days before the sighting at Sacred Heart. Repeated sightings had local news media buzzing, and stories were distributed over wire services far and wide.

As The Daily Dispatch asked in its main front-page headline on March 10, “Is Something Up There?”

Air Force investigators concluded that yes, something was up there. In a 94-page report now available online, the two captains said that “all witnesses appeared to be reliable. They did see an object.” Very likely an object made on Earth. By 1967, the Air Force was used to this.

From 1947 through 1969, the Air Force investigated thousands of reported UFO sightings, in an effort that from 1951 was called Project Blue Book. The project eventually was discontinued with the conclusion that reported UFOs posed no security threats to the United States. It was also determined that there was no evidence that any of the objects sighted were extraterrestrial vehicles.

While in the Quad-Cities, USAF Capts. Edward Orenic and Anton Kato conducted many interviews; consulted with air traffic controllers, private pilots and military units; calculated weather conditions for the times and places objects were observed; and drew a lot of circles and arrows on several maps.

Unlike the great majority of the Project Blue Book reports, investigators came to no firm conclusion about the local phenomena.

They said the sightings in rural areas were “most likely” attributable to a couple of large balloons with lights constructed out of plastic laundry bags found near Monmouth.

But they were “unable to positively identify the object” spotted by Mr. Fisher and others from the area around Sacred Heart, the Air Force report’s conclusion states. Most likely an “air vehicle” of some kind.

Mr. Fisher and his son have never come to any conclusion, either.

William Fisher Jr. was 11 at the time of the Sacred Heart sighting filmed by his dad. He and a friend were at the end of a line of students being shepherded across a lot to Culemans Hall.

“He and I were lagging behind and fooling around,” William Fisher Jr., a consultant for educational assessment metrics in Sausalito, Calif., said recently. “He pointed up in the sky and said, ‘Hey, look at that plane, it’s just hanging there.’ I looked up, and there’s a big oblong shape just hanging there. There were no wings.

“It was oblong and really shining and hanging. It was silvery white, just reflecting sunlight. As soon as I looked up and saw it, my jaw dropped, wondering what this was.”

Like his father, William Jr. to this day does not know what the object was.

“I’ve always said it was nothing but an unidentified flying object,” William Jr. said. “The key word is unidentified. I’ve never made any conclusion about what we saw. We saw something bright and shiny in the sky we couldn’t explain. That’s all it was. It could be a lot of different things. What we don’t know is way more than what we do know.”

It was no coincidence that Officer Fisher had a movie camera in a storage container on his motorcycle. He had put it there after hearing of the previous local UFO sightings.

“They were being viewed by a lot of people,” Mr. Fisher said. “There were stories all around. I was just naturally curious. I had my camera in there just in case.”

This was noted by the Air Force. The investigators appeared to make a point of noting witnesses who might have a taste for science fiction or who were aware of the many sightings going on. People who might want to see something, even if subconsciously.

Mr. Fisher, the report says, “seemed to be a very conscientious and dedicated officer. He is active in church activities, particularly scouting.” But it also noted that he liked science fiction, and that “he made the statement that he ‘watches the sky every chance he gets.’”

Mr. Fisher said the investigators seemed to be fishing for such statements with leading questions. He remains adamant that he saw what he saw. He doesn’t know what it was, but it most certainly wasn’t a balloon, he said. And several other people saw it and were startled by it, too.

“It’s still pretty vivid in my mind,” he said.

Mr. Fisher’s statement to Capt. Kato in 1967 runs to two single-spaced pages and is quite detailed. At first he thought it was a government helicopter, but there was no rotor. As he started filming it, the object moved away to the northwest. It was “elongated,” with a metallic and shiny surface.

The most vivid and startling descriptions are from the Knox County sheriff’s deputy. Names are blacked out in the online Air Force reports, but contemporary newspaper reports identified him as F.W. Courson. With his binoculars, he described an object traveling directly overhead at 250 to 300 mph.

“The bottom part of this object had a rim around it 5 or 6 feet thick,” according to the deputy’s statement. “This rim was spinning at a terrific rate of speed. However, the bottom part of the object appeared to have vents in it, small narrow vents.

“… Now, the top of the ship, or this object, as much as I could make out, was kind of a whitish crystalline looking … as to the height of this object, I would estimate at twenty-five hundred to three thousand feet. … In referring to the white ray that emitted from the object, it looked more or less to me — the best way I can describe it, it looked like a sun ray…”

The Air Force captains were ready to dismiss such a description as a balloon contraption with a hot-air generator in an aluminum tub whose construction, they said, had been described in a national magazine and likely copied.

They didn’t outright dismiss other explanations, but made clear their conclusion:

“In summary, the object that was sighted could have been any of the possibilities mentioned, including the space ship described. However, in the opinion of the investigators, it was most likely a plastic clothing bag.”

All part of a national hysteria at the time, the captains said.

“In conclusion, it is the opinion of the undersigned investigators that the U.S. news reporting media unwittingly causes a type of mass hysteria associated with unknown object sighting. Most all observers appear to be extremely reliable but have a ‘strong desire to see something’ or ‘thought I’d never see a saucer’ attitude about them. These two conditions along with ‘prank launchings’ seem to have resulted in widespread ‘UFO sightings.'”