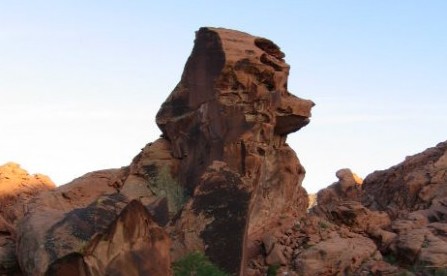 TUCSON, Ariz. (Cryptozoology News) — A group of three mountain bikers reportedly saw a reptilian humanoid last week in the middle of a trail located in the Sonoran desert.

The bicyclists were riding the 24 Hours in the Old Pueblo race course, a 17 mile trail, when they spotted the creature.

“It’s a tough one,” said G. Johnson, 34, a self-described businessperson from Tucson. “It is a 24 hour track, so you better come prepared with more than enough food and water. There are times you just wanna go back and wish you had never got there in the first place. But when you see what nature has to offer you here…well, those regrets dissipate rather quickly.”

Johnson states that he and two other friends were half way into the track when something “terrifying” made the group consider cancelling the ride.

“We had been riding for about… I don’t know maybe nine hours, taking breaks every now and then. Then Michael says he needs to stop for a minute. We are waiting for him to finish when all of a sudden we see this long figure walking across the trail. He is maybe about 6-foot tall, very very skinny, and it had an awkward gait, like a monkey…or a man with a disease, almost robotic, kind of,” he told Cryptozoology News.

According to the eyewitness, two of the men were watching the strange animal while the third one, Michael, was unaware of what was happening.

“Then all I remember about Michael is him saying what the hell is that? Or something like that. But he sounded far away. He probably used a different word instead of hell. Thing is, we had somehow walked a little towards the thing. Don’t ask me why…maybe to look at it better, not knowing what it was.”

Then, Johnson says, the creature “heard Michael speak” and, apparently taking notice of the “intruders”, its head took an eerie 280 degree turn.

“He stopped and it made eye contact with me and I could see him clearly. The eyes were kind of like a snake’s, but black and with a yellow stripe in the middle of the eye. It had green and red scales on the face and head. The red color was kind of like the same as the desert sand there, and it looked like it had a sandy texture too. It didn’t have a nose, only two holes on it. I couldn’t see any ears or hair. A red mouth that looked like it had blood around it, but it didn’t look like it was bleeding, it looked like a pattern. It reminded me of a chameleon, but it looked like a person too.”

Allegedly, the creature raised its “long arms with strange looking claws that looked like a branch full of thorns” and waved at them, emitting a loud chattering sound with its teeth. Then it rapidly ran away, in a fashion that reminded the witness of “a lizard trying to hide.”

“He looked like he was examining us and then he ran into the desert. We thought about going back the same way we came, but we thought it didn’t matter, since we were in the middle of the track anyway. We were scared, to be honest. None of us had ever seen anything like it. It lasted only a few seconds, but it felt longer than that, at least to me. So after we talked about it for a while, we decided to go on and finish the track.”

Johnson believes that what they saw was real and not a product of their imagination. “When you read these stories online or watch them on TV, well, you think man these people are crazy, on meds or something or in need of attention, but this has made me a believer. There has to be more of them out there. If there’s one, there’s gotta be two at least right? I know most people won’t believe a word I said, that’s the way I used to be. I don’t blame them at all. But they are out there. Now I’m not saying this is an alien or a chupacabra or anything like it, all I’m saying is I have never seen anything like it in my life. But I am no biologist so what do I know.”

Theories of subterranean “alien” bases are popular in the UFO community and describe the entities as humanoids of reptilian appearance. Southwestern Native American legends tell the story of underground creatures living next to humans for thousands of years. People living around the New Mexico border report seeing strange lights in the sky and bizarre phenomena. Indirectly creating a thin line between cryptozoology and ufology, writer Mac Tonnies, in his book The Cryptoterrestrials: A Meditation on Indigenous Humanoids and the Aliens Among Us, proposes the idea that certain “alien” sightings could be attributed to the existence of a group of humanoid species endemic to Earth.