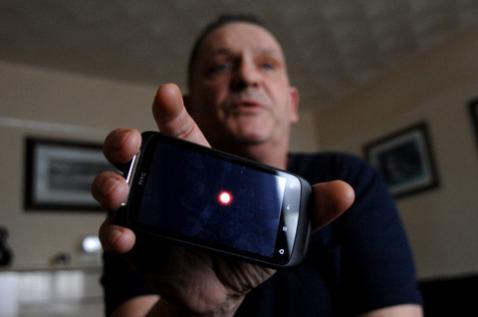 From Roswell to , this red light in the Sussex sky might be a job for Mulder and Scully.

These pictures show the mysterious red blob that appeared in skies above Hove and have sparked speculation that extraterrestrials are holidaying above the south coast.

Even more mysteriously the apparition was apparently chased away by helicopters, although officials have denied all knowledge.

David Flannery, from Sherbourne Close, Rottingdean, was so stunned when he saw the floating illumination he rushed to get his camera to record the event.

He said: “I have never seen anything like it. It must have been huge close up because you could see it very clearly from far away.

“I was standing in Holmes Avenue and it was hovering in the sky over Kemp Town way.

“I can say for definite this wasn’t a Chinese lantern. I know what they look like and they move about.

“It was moving from left to right, then up and down.

“I thought ‘I must get the video out of the van’ and I got the whole thing on camera.

“You can see two other red dots – those are the helicopters that flew towards it. They wouldn’t be doing that if it was just a Chinese lantern, would they?

Mr Flannery, 54, called Sussex Police and the Ministry of Justice but received no answers.

This is despite sightings across the city.

He said: “My friend Keith told me he knew someone who had seen it and I said ‘Don’t call him a liar, I’ve got it on video’.

“I’m convinced this is something out of the ordinary but it’s not in the interests of the police or the Government to admit that. They want to keep it under wraps.

“I wouldn’t be saying all this if I wasn’t sure of what I saw. I wouldn’t want to make a fool of myself.”

If anyone else saw the red light, which was seen in late December, tweet @leegibbs_ or email news @theargus.co.uk.