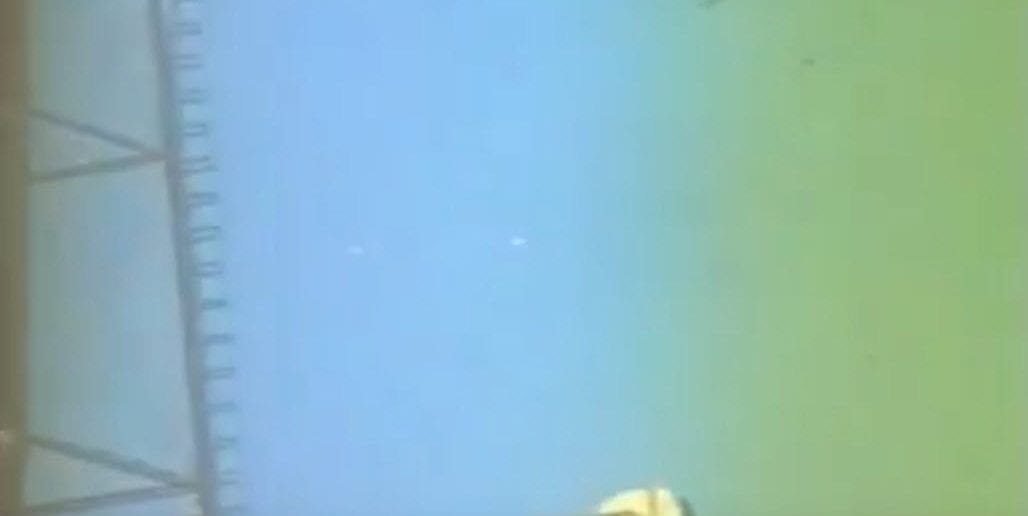 This is the write-up in the Condon report about this incident:

At 11:25 a.m. (5 August or 15 August) Witness I, general manager of the Great Falls Electrics, a baseball team, was making an inspection of the baseball stadium (1,3) with his secretary, Witness II. In virtually all early publications (e.g., 3,5) the date for this is consistently given as 15 August 1950. However, Dr. Roy Craig of the Colorado project notes early correspondence between Witness I and Project Blue Book that raises an uncertainty about the date. A letter dated 9 January 1953, from Great Falls AFB (renamed Malstrom AFB later) to Project Blue Book, conveying results of a re-interrogation which had been requested by Blue Book, states:

“(Witness I’s) version of the incident is as follows: ‘On about the 5th or 15th of August, 1950, I, as manager of the Electrics, a local baseball team, walked to the grandstand of the local stadium here in Great Falls, Montana. It was approximately 11:30 a.m. and my purpose was to check the direction of the wind in preparation for the afternoon’s game.'”

Accounts of the incident give essentially the following information:

As was his habit, Witness I looked NNW to the smokestack of the Anaconda Copper Company in order to ascertain the wind direction. Directly in line with the stack, he saw two bright lights stationary in the sky(l) . After a few seconds, he decided they could not be airplanes, directed his secretary’s attention to the objects, and ran to his car which was 50-60 ft. away (1,2,3). Her observations were reported in Blue Book files to be identical to Witness I’s. At his car he took five to eight seconds to load his motion picture camera with Eastman Kodachrome, daylight-type (1). The camera was a Revere turret-type, 16mm. magazine loader, with a F.1.9 telephoto lens with a 3 in. focal length. He set the diaphragm at F.22 and the focus at infinity. Film speed was 16 frames per second (2). From the time of sighting until he began filming, approximately 30 seconds elapsed. At a point near his car, he began “panning” his camera slowly from right to left (2). During this time the lights had moved from a stationary position toward the SW and they continued to the SW until they faded away. The first frames were not made until the object was already in the SW.

According to the initial Air Force report of 6 October 1950, Witness I described two disk-shaped lights having a bright, clean, “aluminum quality”. He thought that the objects were about 50 ft. in diameter, 3 ft. in depth and about 50 yds. apart. In a subsequent written statement quoted in the Blue Book report of 9 January 1953, he described them as being “like two new dimes in the sky” and said they may have made whistling or whooshing noise .

According to the initial report of 6 October 1950, Witness I described a definite spinning motion (2). While in a stationary position “an occasional vibration seemed to momentarily tilt them, after which they would instantly correct their level plane to its seemingly balanced position. The two objects made an abrupt flight in an arc motion at very high speeds”. In late 1952 he estimated the speed as being over 400 mph. The Air Force report of 1950 quotes his first estimate of the speed as about 200 mph.

WItness I thought they were between 5,000 and 10,000 ft. in altitude and at an elevation angle of 30°-35° above the horizon and within 0.75 mi. or 2-2.5 mi. from him. Measurements of the motion picture film (3) indicate that in the first available frames, the lights were at an elevation of about 15° and slowly descending.

These are the official documents about it from the Project Blue Book files. It’s officially considered an unknown. The below file was obtained from the National Archives & Records Administration.