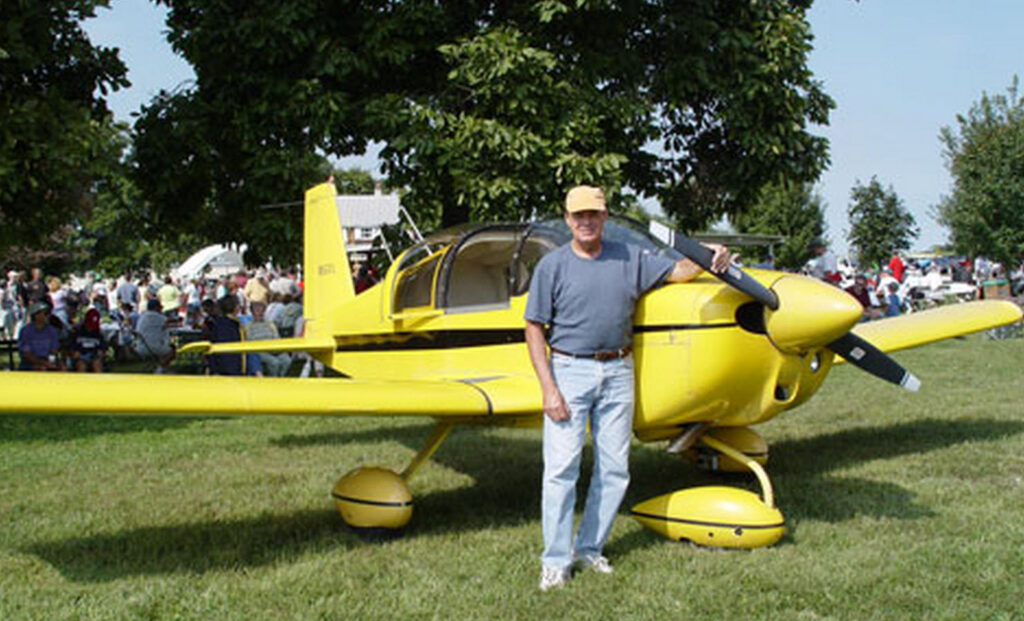 Photo of the 1973 Grumman AA1B Airplane & the Witness. This is the Plane That Was Flown on the Day of Sighting.
Daytime Sightings

Description: This (my sighting) happened about 3:30 PM January 3,  1988.  I was flying my private planeabout 1200 Feet above sea level over New Britain, PA when this object came down out of the sky from high above at a tremendous speed & leveled off just in front of my airplane about 500 yards North or so.  I increased power to get as close as possible as it just hovered in one place in front of me. I advanced my throttle to 100% power and as I accelerated the object turned to the SSW (I was heading NNE when I spotted the object “falling out of the sky at high speed.)  I immediately called the nearby Willow Grove Naval Air Base on their frequency and told them what I was viewing.  The tower operator informed me he would do a radar sweep and after doing so he reported to me that there was nothing indicated on his scope.  By this time, the object was traveling quite fast, estimated at about 300 MPH perhaps (I can only do 110-125 in my Grumman) and was about 10 miles SSW of me.  The object then swung around 180 degrees and headed back by my way.  It then came to within 200 yards or so of my right wing at the same altitude I was flying.  I called the military base again and they reported nothing on their radar. Suddenly the object tilted slightly back and then took off straight up in a flash, so fast that I barely saw it depart.  The military tower operator asked me if I wanted to report a “UFO” and I was reluctant to do so.  After some convincing I gave him my airplane’s “N” number and home contact info.  I received a call from a gentleman who described himself as being from the “Government UFO Center” and I gave him the whole story.  I never heard another word from anyone.

I’m attaching a drawing of what I saw, again in broad daylight.  Sorry, I had no camera with me. SHUCKS!!  The ‘thing’ was an estimated 35 to 50 Feet. in ‘height” and almost looked like a large airplane wing standing on end.  The object was a beautiful gold color like I have never seen before.  It made no sound and contained no windows.  There were no signs of any type of exhaust from a propulsion system nor was there any wake turbulence and all of my airplane systems worked OK. There was no disturbance.

Additional Information Provided by Witness: I was flying my 1973 Grumman AA1B which I have owned for 28 1/2 years.  I’m attaching a picture of the plane (see above) and I’m not sure, again, if the Navy would keep radio records.  Also, I wish I would have written down  the name of the man who called me that very night at home and identified himself as being from the U.S. Government UFO investigation center.  He called me about 10 or 11 PM that night.   I guess the Navy people thought the sighting must have been pretty important to have someone contact me that quickly.

Note: Wow! What did this guy see? It doesn’t sound like anything from this world? It is interesting to note that the Navy did not pick up the object on radar. Perhaps the object was too close to the airplane to have painted a separate return?