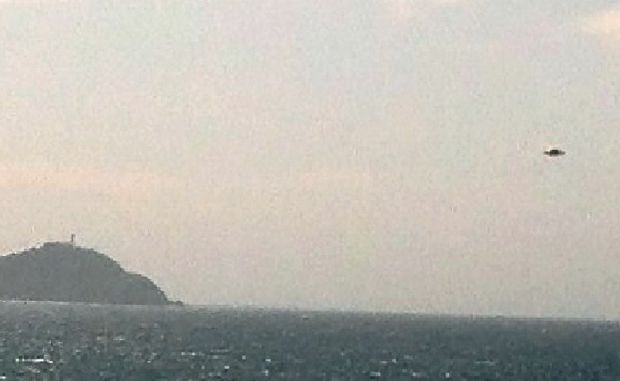 A BALLINA man took this photo of an unidentified flying object at Broken Head in August but researchers from UFO Research NSW are reluctant to say it could be genuine.

Adam Frankham and his girlfriend went to the lookout and walking track at Broken Head on August 24 and he took two photos seconds apart, one showing a clear sky and the next showing an unidentified flying object flying above the ocean.

But Mr Frankham didn’t discover what he had captured until three weeks later when he downloaded the images from his phoneto his computer.

“We went for a bit of a walk up there to have a look and I stopped on the way up there to take a couple of shots like I usually do,” he said.

“We worked out it definitely couldn’t have been a plane because there was no noise at all, we couldn’t hear a thing.”

Mr Frankham said he spoke to a photographer in Ballina about the photo and he said he has seen many pictures like his over the years.

“One of his friends who actually drove from Byron that day and saw something very weird as well a bit later that day,” he said.

Seeing the unidentified flying object in the photo has changed Mr Frankham’s opinion on UFOs.

“I do believe that something could be there but I’m not really a believer, I have always looked and thought how do you know if that’s real.”

UFO Research NSW media manager Doug Moffett said as he was not a photo or video analysis expert he would not be prepared to declare the object in Mr Frankham’s photo as UFO.

“If an expert was to look at this photo and analyse it, at the end of the day all they would be able to tell you is what it isn’t,” he said.

After more than 20 years in the industry, Mr Moffett said he believed UFOs were mysterious because 60 years after the famous Roswell incident there has been little scientific research done into UFOs.

“There is no actual scientific research done on UFOs because the scientists think it’s a load of crap,” he said.

“And that’s why it remains in the mystery basket, not because there is no one who can analyse the photos, but because it has been rejected by scientists.”