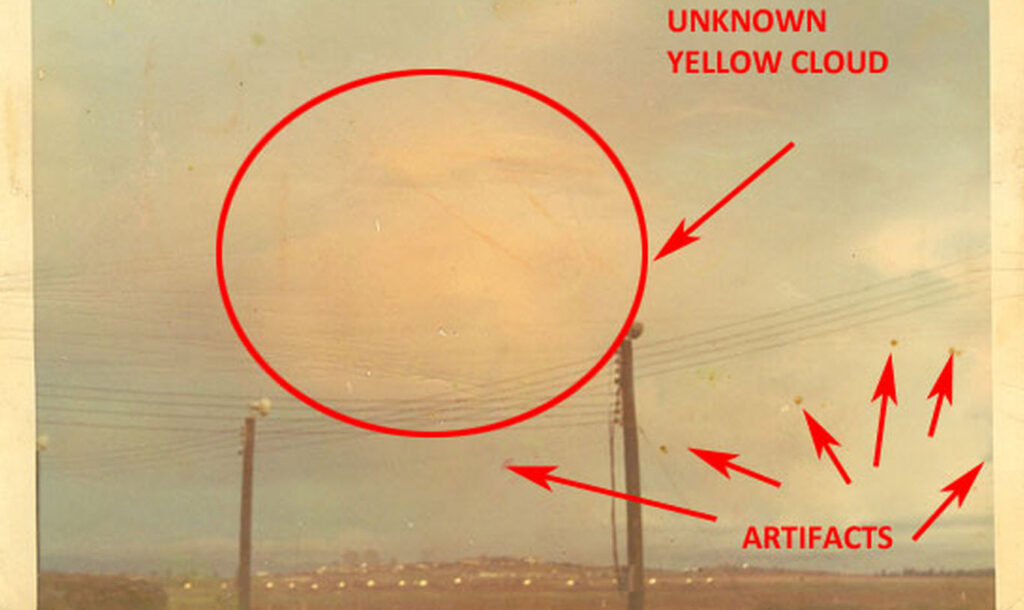 Description: In the spring of 1969, I was 20 years old and in the U.S. Army stationed in Plieku, South Vietnam. I was in the 62nd Maintenance Battalion working in the security platoon. Guard duty was my main job.

On this day, I started the second shift at 3:00 PM and was scheduled to work until midnight. The temperature was around 75 degrees and it was partly cloudy. I was on a SSE guard tower overlooking a 100 yards perimeter. Rows of razor wire extended 300 feet and the perimeter was surrounded by miles of rice paddies.

I had been on tower guard for about three hours, and it was around 6:00 PM. I was observing the rice paddies about two to three miles out when an unidentified glowing object caught my eye. I observed the yellowish glowing object for about five minutes, and I felt like this object was communicating with me by putting calming thoughts into my head. At this time, I had no fear of the object. This object was hovering two to three feet off of the ridgeline near the rice paddies.

I didn’t even see it move. Whatever the object was, it moved with incredible speed. In just a split second, it had traveled over three miles to my location. I was stunned by the speed, but I still had no fear of it.

Now I could see this cloaked cloud had what seemed to have a dirty mist surrounding it. I could not take my eyes off of this object. I could see this cloaking seem to get thicker surrounding the object. The glowing was coming from inside of the cloud. After a minute or so, the mist surrounding the object was growing really thick and suddenly there were three or four silver colored orbs out in the perimeter. They were the size of a medicine ball and were just floating in the air at different heights from the ground and different locations from the razor wire. Still I heard no noise and as suddenly as the orbs appeared, they simply disappeared.

I continued to observe this strange object for a few more minutes and suddenly it was gone. It just disappeared from sight. This sighting took place over an eight to ten minute period of time, yet this sighting has had a lasting impact on me. The actual sighting left me with more questions than answers. I did manage to take a photograph of the object while it hovered above the light pole.

NOTE: The witness took the photo from a “30 foot gun tower” while on guard duty. He always carried a camera with him. He did not report the incident nor did he discuss it with anyone in his Battalion.

The witness showed this picture to a “UFO expert” that he had heard on a radio show around 1985. He doesn’t remember the name of the expert. He met the expert at a coffee shop in Dayton, Ohio. He signed a release statement and the UFO investigator sent the photo to the Jet Propulsion Lab (JPL) in Pasadena, CA. Two months later the witness received the photo back and a typewritten report. The report said that the object was “unidentified and was a genuine UFO. The witness moved to Florida and his house was burglarized. The JPL report was taken among other belongings. He also does not remember the name of the investigator, but thought that he was between 25 and 30 years old.