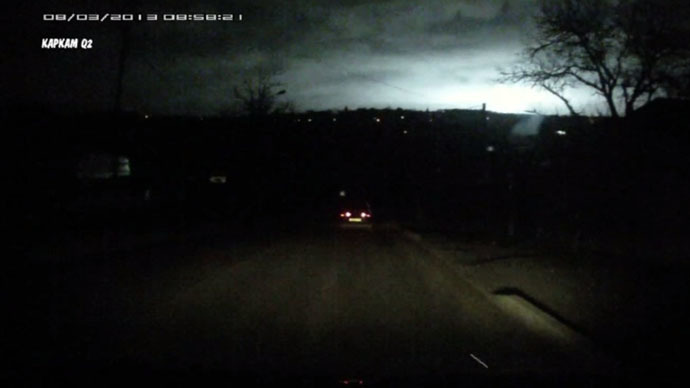 
An inexplicable white-and-blue flash was spotted lighting up the sky over the southern Russian city of Stavropol. A dashcam video has since triggered a heated debate over the origins of the mysterious sight.

Stavropol’s horizon offered a jaw-dropping view to those who weren’t asleep at around 00:39 local time (21.39 GMT on Monday). The soundless flash of light scared several people, as it made some streetlights in the city go out, while being accompanied by the flickering of lights inside apartments and houses.

Local residents have come up with various theories to interpret the incident – military exercises that are currently taking place not far from the scene, faults in the electricity net, Northern Lights, an asteroid and even UFOs.

“I was very frightened by what I saw, I was already in bed. It looked as if something very bright lit up my ceiling,” a woman shared her experience on social media, Russian daily Argumenty i Fakty reported.

According to the Hydrometeorological Center of the city, the phenomenon “can’t be attributed to nature”– rather, it could be anthropogenic. The source of the light is thought to have been located somewhere on the ground.

However power engineers have rejected a version suggesting a fault in the power supply line leaving the public clueless about the nature of the mysterious flash.

Note from The Black Vault: It is my belief that cases like this are nothing more than a meteor entering the Earth’s atmosphere. In the past, we know (especially in and around Russia) there have been multiple cases of meteors lighting up the night sky, and even hitting the Earth’s surface.  In this case, you can clearly see a heavy cloud cover – so it is plausible this was a meteorite (shielded by the cloud cover) but the immense bright light still illuminates the night sky.