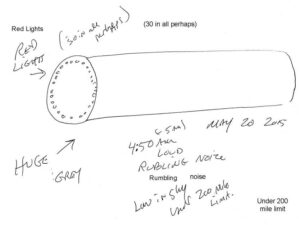 Sketch by the witness of the object.

The following was submitted to The Black Vault – it is used here with permission:

I believe I read something on the site one time about collecting sighting reports.

Well I had one recently and it was a dandy, so I’m going to pass it along to you.

I reported this (left a message on their answering machine) to some local observatory that was supposed to be interested in reports of such things but they never got back to me.

5 days ago on the morning of May 20 2015 I saw a HUGE unidentified object up in the morning sky here in Thunder Bay, Ontario (Canada). (point zero on Lake Superior)

I was sitting here at my computer at about 4:50 a.m. and I was replying to an e-mail a friend had sent me. My bedroom window was open and I could hear what I believed to be an airplane flying overhead. We get this a lot (all sorts of air traffic at all hours of the day and night) and I’m used to these sounds.

I’ve seen about every type of aircraft, blimp, stunt parachutists, and you name it that exists at one time or other. Even some very up close views of water bombers fighting a brush fire on the nearby Expressway. One time a friend and I even saw a Russian MIG fighter flying in low under the 200 mile radar limit.

I was about ready to head off to bed and had just pulled down my blinds. So while I could hear the object I couldn’t see anything out the window here at the time. Often times a plane will fly over and I will see it’s lights as I’m sitting here typing at night or in the early morning. Those are usually fairly low flying aircraft on their way to land at the airport across town on the south side. Not a big deal really.

I live on Theresa Street, which is on the north side of the city. Well away from the local airport, but from what I’m told in a very “busy air corridor” as they call it. Theresa street is close to the Expressway, so often times we can hear traffic when it’s quiet at night as well.

In any case, something was flying overhead. Normally things which sound like this did – a low but pretty loud rumbling sound – are up VERY high in the atmosphere (thousands of feet) where you would never see them. This one seemed to be taking forever to pass overhead, so I got really curious and thought “WTF” is going on here.

After saying something like “pass over head all fucking ready” out loud as I typed, I got so curious that I wondered if there were a fleet of cargo planes or some big military operation going on or something, so I decided to go look out the window in the kitchen on the opposite side of the house. I figured by the time I’d get the blind up it would be towards the front of the house, so I headed to the kitchen for a look to the south. I figured that whatever it was would be so high up that I’d never see it anyway.

As I looked out the kitchen window I saw a huge object – which could be described as cigar shaped. It seemed to be grey in colour and HUGE. Really huge. It was flying very low in the sky. No more than 100 feet or so high I’d estimate. IF THAT. Much too low for most aircraft I’m familiar with to be flying. It was just above the roof tops and tree lines. As the object continued to move on a north to south course, moving slightly to the west at times I could see a series of lights on the back of the object.

Not on the bottom, like so many sightings you hear about of saucer shaped discs. This object was long, grey, and at the back it had 2 sets of red lights. Each a semi-circle of about 12 to 15 lights. One a semi-circle like an upside down U shape and the other a semi-circle like a letter U. They formed a circle – almost – there was a slight gap – but there were about 30 red lights in all and perhaps one blue or green light to the left side – outside the ring of lights.

I’m thinking the object was some type of secret military craft, but so far I’ve heard nothing about anyone else sighting anything like this around here of late.

I saw it out the window at about 5 minutes to 5 am (heard it a bit earlier) and watched it for about 5 minutes before it was out of sight – mainly due to trees and a large building nearby about a block away that blocks our view to the south.

In the distance as it was about where some trees are some blocks (3 maybe?) away from here. I could put my hands up to the window and if I put my two thumbs together and my two middle fingers together to form a circle (about the size of a LARGE naval orange) – that’s how big the circle of red lights was at that distance. Quite big.

In fact I did so while it was there just to get some measure of the size of the object.

I was looking for UFO images online one day and I found this, see inserted image below…

This is sort of what it looked like. I don’t know if it was as big as this image and I didn’t see any markings, doors, gun ports, antenna or saucers flying out of it, but the back of what I saw looked similar to this object. The dots on the rear of this object are similar to how the lights were on the back of what I saw – except they were all red.

I wish I’d thought to grab a camera (I have a cheap crappy one that can take video – the quality would not have been much at all – but it picks up light pretty good) but I wasn’t really expecting to see anything, let alone circles of red lights and huge oblong grey aircraft of some type.

Unfortunately I don’t even keep batteries in the camera in case of something like this happening because the batteries tend to die in it even when not in use and it takes expensive alkaline batteries and normal batteries don’t provide it with enough juice to power up. Major power pig for such a useless cheap sucky camera…

I saw what I did and I’m not afraid of debunkers or mockers etc….  I don’t see things that are not there and I didn’t see Venus, swamp gas, a weather balloon, ball lightning, The Northern Lights, or anything of that nature.