The following was published on May 17, 2015, by the Birmingham Mail, and is archived here for reference. All copyrights are held by their respective owners.

Mike Bedward has heard it through the grapevine that extraterrestrials are drawn to spectacular sky scenes, such as dazzling sunrises and this double rainbow.

What’s Going On? It’s more UFMotown than UFO – a fleet of strange craft spotted in the sky over Birmingham by a Marvin Gaye tribute act.

And Mike Bedward has heard it through the grapevine that extraterrestrials are drawn to spectacular sky scenes, such as dazzling sunrises and this double rainbow.

The Stechford singer didn’t know what he’d inadvertently caught on camera until he studied pictures of the rainbows. It Takes Two, apparently, to attract aliens.

The 44-year-old was intrigued by shrapnel-type flecks against the rainbow, snapped at 6.30pm on Monday.

Zooming in on the images revealed the shining slivers to be cigar-shaped crafts in the blue sky over Alum Rock.

Mike said: “I was trying to take a picture of the rainbow – it was only later that I noticed the shapes.

“I’m not saying they are UFOs, although, yes, I’m a believer. I’m saying I can’t explain what I’ve pictured, and neither can other people.

“The crafts are rectangular and glow like strip lights. I’ve seen strange things in the sky before. This is the first time I’ve had a camera with me.”

He added: “I believe UFOs are attracted to beautiful things like rainbows.”

It’s not the first time Alum Rock has been in the grip of a Close Encounter.

On November 3, 2010, the authorities were contacted following reports of a large black object moving slowly across the sky.

Witness Paul Ryan, who spotted the craft at 7pm, reported: “It was a very large object which i could tell by the sets of lights in the three corners.

“In each corner there were many different coloured flashing lights, very bright and changing colours very quickly. The object appeared to be flying very low and very slow. It was also completely silent.”

“I continued to watch for a couple of minutes, thinking that the object might reappear further along, in a south east direction, but it had vanished into the small low flying cloud and didn’t reappear.”

And chairman Dave Hodrien has been quick to point out to our Marvin Gaye impersonator: “It ain’t nothin’ like the real thing”.

“It’s very rare,” said Dave, “that we see a picture and think, ‘wow’. It’s very rare we see something that can’t be explained.

“In this instance the probable explanation is lens flare, a scattering of light in the lens system.

“It has nothing to do with the rainbow. It’s caused by sunlight.” 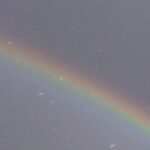