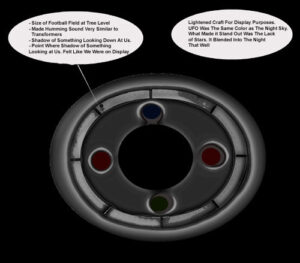 Drawing submitted by the witnesses

Description (In Witness’s Own Words): It was the fall of 1990. I was in my home in Almont, MI. That time of year it gets dark quite early. It must of been around 8:00 PM: “The times are now just an approximation.” My son, who at the time was around 12 came running in the house saying there was a UFO right outside our house. Let me add at this point I was not one who believed in UFOs. I went outside and my son pointed south and upwards and said look! The funny thing was at first I didn’t see anything, but I did notice it was unusually dark. Then I noticed a very dim light. I suddenly realized that the reason it was so dark was that there was a huge craft right over our driveway. It was at tree level and was moving north and a very slow pace, “approximately a slow walking speed.” There was a very distinct humming, exactly like a large transformer hums. There was a very dull light in the middle and as it traveled down or driveway I made out a row of windows around the craft. The windows looked very large. I remember walking down the driveway with my son. Then the next thing I remember is standing out in the field north of my house still looking at the UFO, when suddenly it went from approximately 90 or 100 ft straight up in the sky to where it was a pinpoint of light. It just looked like another star. This happened in under a second. We continued to watch it for quite awhile when it took off in a northwesterly direction like a meteor and was gone in a second. There are a lot of things I can describe if you are interested, but this is the basic part. I don’t feel like I was abducted, but I honestly do not remember how I got from my driveway and then in the field. I have asked my son about it and he remembers things the way I do, but what I find unusual is that:
1. I didn’t really focus on it that much after the initial day it happened until a few years ago.
2. My son doesn’t seem as interested as I am, even though he is a very intelligent guy. I was a flight simulator instructor in the air force and I have a lot of knowledge regarding aircraft. This will always go down as the most bizarre day in my life. By the way, it seemed like I was being watched by someone in the window, but it was like you could only make out a shadow. I am now fascinated by UFOs and I know that their out there. Please, if you have any more questions feel free to ask. Almont is about 20 SE of Brown City. I have never seen another unusual craft. This was definitely a UFO. There is no other explanation for it. I am the type of guy that checks his facts. There is nothing on our planet that I am aware of that could do what I saw! The pilots would be dead just from the G forces.

Investigator’s Notes: This sighting happened several years ago, but the witness still vividly recalls details and was able to construct an explicit drawing of the object that he sighted. (It is not known when the drawing was constructed.) The witness has a good background and should be qualified to ascertain whether or not an aircraft is of conventional type. This sighting falls into the unidentified category.