The following case is used with permission by UFOs NorthWest. It can not be reproduced in any way, without permission.

This is an example of a case that has physical trace evidence, and the investigation is ongoing.

If it is a hoax, it is one of those that you have to ask yourself, “Why?”  With no notoriety since they requested anonymity, there is no money since they never asked for payment and the work to create the hole etc., seems like a whole lot of work, for nothing.

An electrical engineer was outside having a cigarette. He at once noticed a bright white oblong object flying from west to east. The object flew right over his house and then towards Lake Champlain.

The man felt his “hair standing on end” like there was electricity in the air. The witness had a red laser pointer light on his key chain. 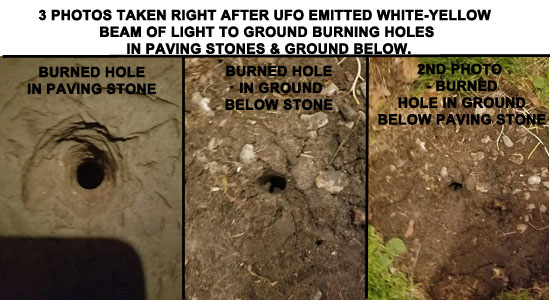 PHOTO COLLAGE OF HOLES BURNED THRU PAVING STONES & GROUND BY BEAM OF LIGHT FROM UFO.

He shined the laser on the object. The object was moving slowly, but stopped when the laser light was shown. The witness couldn’t see the laser light reflecting off of the object. The object at once stopped and shot a white-yellow beam of light close to the witness’s feet and the light burned a hole through a paving stone and into the ground below. (See above photo collage.) The witness scurried into the house right after the light burned the hole through the stone into the ground.

He called and reported his sighting and later retrieved the stone (at my request). He took the stone into his house and the stone was very hot. This was about one-half hour after the hole had been burned. (The temperature outside was about 45 degrees F.)

The witness then took photos of the ground below the stone. (See above photo collage.) He said that he saw the object for only about 45 seconds, but that it returned later and hovered over his house for several minutes.

The witness noticed strange individuals gathering outside his house and was terrified of them as they seemed to be watching him in his house. He also saw a police car across the street with flashing lights. The witness was afraid to go outside as the individuals looked suspect. (They were wearing hoodies and had backpacks on.)

I requested that the witness take samples of the burned area and area surrounding it. He said that he took the samples and then the next message stated that they “were taking my phone.”

He also saw a large black car parked by the Elks Club across the street. The witness texted the photos to my cellphone. A few minutes later he texted that they “were taking my phone.” He then stated that the FBI “collected his evidence.” I then received a text saying that the phone number was no longer in service. The witness saw a similar object about 4 months ago.

Here is the 38 Minute Follow-Up Interview with the witness, conducted by William Puckett.

No Signs of Soil “Vitrification”

Note from The Black Vault: There is something to note from the photographs below. There are no burn or scorch marks in the stone, or the dirt.

During Season 3 of the History Channel show UFO Hunters, I was a producer and writer on an episode entitled, “UFO Relics.”  In this episode, I had the UFO Hunters team meet with investigator Nancy Talbott, and she talked about a case in Poland where there was “vitrified soil.” When soil or sand is exposed to extremely high temperatures, it gets “vitrified” or turns to glass.

We even did an experiment in a warehouse, wherein we took dirt and put it under a high powered torch, and we vitrified it, meaning, it turned to glass. There is no evidence here of that, and no evidence of burning of any kind. Does this mean it didn’t happen? No. It may mean that the witness is incorrect assuming it was a laser. What is an alternative? Well, not sure, to be honest. But as an investigator, we can’t rule out that the witness did, in fact, experience what he did, but is incorrect in assuming it was a “laser” that was fired back at him.

The following are photographs of the area, where the beam allegedly hit.

Either this was a well perpetuated hoax or a very compelling close encounter with a UFO. The witness was afraid to call the police because he has a responsible job. He is an electrical engineer and contracts with other companies. He has his own business. He is also married and has kids. He is 48 years old and has never seen anything like this. He said that he was in good physical and emotional health. The witness had not discussed the incident with his family.

It has been said in UFO circles that “what goes up, must come down.” This case appears to be an outright hoax or the witness may be delusional.

Here is what has transpired

He claims to have been harassed by 2 men in dark suits for several days. He also claims that his neighbors were also harassed by these “alleged” agents. He says that he was visited by others including people identifying themselves as ufologists. When I pressed him for getting in contact with his neighbors he said that they were all “tight lipped” also. There is absolutely nothing in the local media regarding the incident. I have received no comments from other witnesses.

The only perplexing detail of this case is that the witness took photos at my request and did not volunteer them. Given this scenario I felt that the photos may have been authentic. He claims that two men entered his house shortly after the incident and took 2 of his cell phones. They identified themselves as FBI agents, but did not show badges. One cell phone had the photos, but he said that he deleted them before the visitors arrived. The next day one cell phone was returned to him via his mailbox.

The evidence in this case is quite anecdotal quite like many UFO cases whether they be biologists who claim to have dissected aliens or whistle blowers who claim to have seen Presidents talking to aliens. These cases make good “talk show” and TV material, but they lack forensic evidence. Some in fact may be true, but these types of cases weigh heavily on the efficacy of the witness.

Perhaps the witness did get harassed by “unknown” agents and they took the package, but my belief is that the witness never mailed the package. The details of his report just don’t add up. He absolutely refuses to provide his address.