The following description was posted as the caption to the above video:

John Lennon had a UFO sighting which occurred when he was with his personal secretary, May Pang, in New York. As May Pang recounts in her book, the “large, circular object [was]coming towards us. It was shaped like a flattened cone and on top was a large, brilliant red light… When it came a little closer, we could make out a row or circle of white lights that ran around the entire rim of the craft.”

The following was published by the Mind Set Central website. It is archived here for reference, and all copyrights are owned by their respective owners. The .mp3 is housed on Mind Set Central’s website, while the text is pasted here for archival purposes.

Not only was John Lennon the founding member of the Beatles, and one of the greatest singer/songwriters the world has known. He was also a political free thinker, who challenged the world with his anthem “Give Peace a Chance”, when America was engulfed in the war in South East Asia. When Lennon attempted to emigrate to the United States in the early 70’s, he was considered such a revolutionary that the United States Intelligence community put Lennon under constant surveillance. This consisted of phone tapping and constant knowledge of his whereabouts at all times. The full extent of Lennon watching the FBI, CIA and NSA got up to, is still not completely known as facts are still coming to light.

The fact that Lennon was so famous and controversial at that time makes his apparent UFO sighting all the stranger. On August 23rd, 1974 Lennon walked out on to the balcony of his New York apartment, and witnessed what he later described as a “Flying Saucer” hovering closely, just above his window.

Lennon became so completely fascinated by the event, that he talked incessantly about the incident, and even included the encounter within two different songs on different albums.

“Like a UFO you came to me, and blew away life’s misery…”

– Out of the Blue, from the album Mind Games.

“There’s UFO’s over New York, and I aint too surprised…”

– Nobody Told Me, from the album Milk and Honey

Below is an interview with Lennon’s assistant/lover May Pang, who also witnessed the event, which completely describes the encounter.

“Though we’ll never know for sure, we hope the aliens onboard the craft that buzzed John Lennon’s 53rd Street Penthouse apartment weren’t shy. For, according to the late Beatle’s ex-girlfriend, the famed mod rocker was standing on the balcony in his birthday suit enjoying the view when his quiet evening at home was interrupted by the likes of a vehicle from another world. May Pang is one of the warmest people you’d ever want to meet. She’s quick to smile and bring you into her confidence.

For unlike many others in the rock and roll business who can sometimes take themselves too seriously, May is happy to share her remembrances about one of the greatest legends of our time. John was always fascinated with the unusual, May explained, handing me his once-treasured copy of the I Ching that she still has on her library shelf. He was always caught up in his fate his destiny. He was it seems – trying to understand his greatness and the impact he had on millions growing up in a very confused, almost lost generation’

May Pang was more than willing to give me the scoop on John’s Big Apple UFO encounter because – as it turned out – she was right there at his side during the incident. We had just ordered up some pizza and since it was such a warm evening, we decided to step out on the terrace. There were no windows directly facing us from across the street, so John just stepped outside with nothing on in order to catch a cool breeze that was coming in right off the East River. I remember I was just inside the bedroom getting dressed when John started shouting for me to come out onto the terrace.

I yelled back that I would be right there, but he kept screaming for me to join him that instant. As I walked out onto the terrace, my eye caught this large, circular object coming towards us. It was shaped like a flattened cone, and on top was a large, brilliant red light, not pulsating as on any of the aircraft we’d see heading for a landing at Newark Airport. May says she and John stood there mesmerized, unable to believe what they were in the process of observing. When it came a little closer, we could make out a row or circle of white lights that ran around the entire rim of the craft – these were also flashing on and off. There were so many of these lights that it was dazzling to the mind. Spellbound, the couple watched the UFO move directly over the building next to where they resided. It was, I would estimate, about the size of a Lear jet and it was so close that if we had something to throw at it, we probably would have hit it quite easily.

During the time that it was almost directly overhead, May says that she didn’t hear any noise. We often had helicopters flying above us, but this was as silent as the night, seventeen stories up above street level. Finally the object passed from view, leaving John and May feeling that the excitement was over for the evening. But as it turned out, the UFO returned and they managed to set up a telescope and view it that way. The light was so brilliant coming from the craft, May recalls, that no additional details could be seen’ We did take a couple of pictures but they turned up overexposed. Immediately John and May telephoned the Daily News, and were told that at least 7 other reports had been received.

We even called the police – that’s how excited we were -and they told us to keep calm, that others had seen it too. According to May, all night long, John kept saying I couldn’t believe it! I can’t believe it…I’ve seen a flying saucer! As confirmation of his sighting, John wrote down what he saw and used it as part of the cover art on his Walls and Bridges album. John had always had an interest in UFOs, May Pang points out. He even used to subscribe to a British UFO Magazine, the Flying Saucer Review. But after seeing what we saw that night, he became even more fanatical, bringing up the subject all the time.”

Presented here for the first time is the only radio interview Lennon ever gave about his close encounter. The sound bite is brief, but informative, and can you certainly hear Lennon’s excitement as he relates his experience. Also included is a sound bite of Lennon’s then girlfriend May Pang, relating what she remembers about the event.

A year or so after his New York UFO encounter, Lennon also claimed to have had a visitation with aliens, at least according to physic Uri Geller. 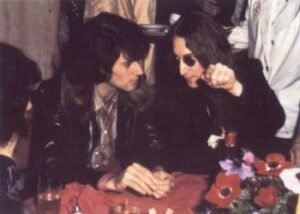 Lennon told Uri he was visited by extra-terrestrials when he was in bed with wife Yoko Ono in 1975.  He explained to Uri, who told Britain’s Sunday Telegraph newspaper in 2004: “I was asleep in my bed, with Yoko in the Dakota Building.  And suddenly, I wasn’t asleep. There was this blazing light, shining through the door.

It was like someone was out there with searchlights, or the apartment was on fire.”I leapt out of bed and there were four people. They were little, bug-like creatures, with big bug eyes and little bug mouths and they were scuttling at me like roaches.”

Lennon insisted he wasn’t on drugs and definitely saw the ‘aliens’.

He added: “I wasn’t high. I’ve been high a lot of times, and I never saw anything on LSD that was as weird as those fuckin’ bugs. I wasn’t dreaming and I wasn’t tripping.”

Lennon also claimed the beings had given him a metal, egg-like object before they left, which he gave to Geller, saying: “It’s too weird.  If it’s my ticket to another planet, I don’t want to go there.”